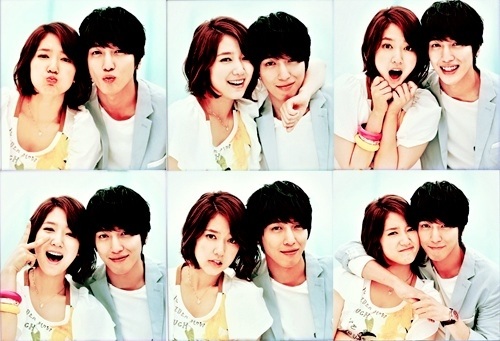 At the heart of every Korean drama is its lead couple. But just what kind of lead couple is it?

This brief guide to some of the most common manifestations will help you know for sure.

As seen in: That Winter the Wind Blows and I’m Sorry, I Love You

Whether it’s different class backgrounds, an age gap of a few (hundred) years, or the fact that they may actually be siblings, this classic K-Drama couple faces seemingly insurmountable obstacles. Recent evolutionary adaptations, presumably in response to global warming trends, have forever changed this unique species. Nearly all field research since 2006 confirms a remarkable lengthening of their lifespans: Once guaranteed a tragic ending with a high body count, nearly all K-Drama Romeo and Juliets are now managing to survive—together—to old age.

As seen in: Jang Ok Jung and I Miss You

Although extremely rare worldwide, The Childhood Sweethearts are one of the most common K-Drama species. While other children are busying dreaming of adulthoods as ballet dancers, rock stars, or spouses of lesser Kardashians, these couples want nothing more than to be together. Unfortunately, their single-minded determination serves as a lightning rod for misery: they will almost always be torn apart in the most horrible of ways and forced to abandon their hopes of domestic bliss (not to mention underage shagging). But because of the peculiar feng shui of Korean geography, it is inevitable that they will eventually be reunited just in time for a happy ending.

As seen in: To the Beautiful You and Personal Taste

For most human beings, excessive exposure to any person or thing leads to annoyance and eventual hatred. A defense mechanism unique to Human beingus spp. Kdramatis, on the other hand, causes a reaction that is closer to adoration. Researchers have confirmed seemingly limitless examples of this response. Whether the subjects start off as best friends, worst enemies, or complete strangers, the time they’re forced to spend together fighting over the TV remote ensures they end up as lovers.

As seen in: Queen of Reversals

Natural Habitat: Myth and legend; widely believed to be cryptozoological

Like those of the Loch Ness Monster and Big Foot, sightings of The Second Lead couple configuration are rare and hotly disputed. The only substantiated case in the modern era is 2010’s Queen of Reversals, although rumored appearances include Baker King, Kim Tak Gu and the original Dream High. No matter how kind, supportive, and genetically preferable second lead males may be, K-Drama females habitually relegate them to the dreaded friendzone. This fundamental flaw is believed to rise from DNA replication errors endemic in the Korean population.

As seen in: Boys over Flowers and My Lovely Sam Soon

Nowhere in the animal kingdom is the line between love and hate as permeable as it is for K-Drama Bickerers. Attraction simmering just below the surface of every heated argument leaves all parties unsure just when fighting will turn into making out. Although Bickerers are nearing endangered status, observers are always on the lookout for any resurgence in numbers.

Distinguishing characteristics: Boys with dreamy expressions on their faces (and no girls in sight), rough-housing that might actually be an excuse for touching

Stemming from a mutation in last year’s bromance trend, Korean drama is now home to a burgeoning population of males displaying an ambiguous love for other males. This variety of sexual chemistry is as yet unconsummated in the mainstream, but School 2013’s boy-on-boy wrestling matches have recently driven temperatures to heights unseen since the sweaty, shirtless volleyball matches of Top Gun. Will this newly observed phenomenon prove hardy enough to last out the year? Will it ever reach full flower in the form of actual kissing? Only time will tell.

As seen in: Ojakygo Brothers and Lie to Me

Many things draw seemingly incompatible K-Drama couples together, but it often takes a contract to keep them that way. These contracts can be fairly simple and straightforward, including only a few basic clauses, or baroquely detailed and spanning many pages of legalese. In truth, K-Drama contracts have only one thing in common: they are quickly and repeatedly violated as the co-signers fall in love.

As seen in: Gentleman’s Dignity and Secret Garden

Distinguishing characteristics: Males who tell females what to do, the word eotteohke

Classic K-Drama males are known for their take-charge attitudes and self-confidence, two traits that can sometimes overwhelm the females they hope to mate with. In relatively rare cases, this imbalance of power can form a serious stumbling block to successful communication, frequently leading to physical intimidation. Happy endings are generally achieved, but some researchers find that the ends do not justify the means.

As seen in: I Need Romance 2012 and Coffee Prince

Are those K-Drama leads having a conversation about something other than how much they love each other? It must be an example of the unusual Best Friends couple configuration, a delightful pairing that genuinely enjoys spending time together even without the promise of romance. Perhaps the most stable and lasting of K-Drama relationships, the Best Friends are sure to provide hours never-ending fascination for viewers and writers alike.

For more K-Drama commentary and reviews, visit Outside Seoul.
A Gentleman's Dignity
Boys Over Flowers
Ojakgyo Brothers
To the Beautiful You
School 2013
That Winter The Wind Blows
Jang Ok Jung
I Need Romance 2012
Queen of Reversals
How does this article make you feel?