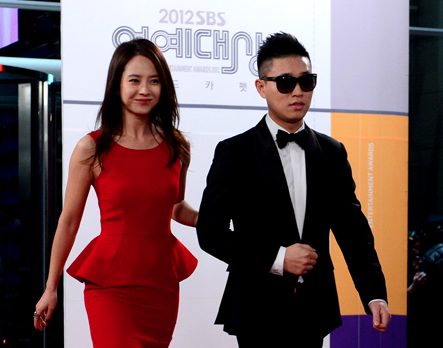 On the recent episode of SBS’s “Running Man,” which was aired on May 19, Uhm Jung Hwa and Kim Sang Kyung appeared as special guests to play the game of “Arrest the Traitor.”

During the show, Song Ji Hyo received a mission, which involved shouting out the name of someone she loves three times and writing this person’s name with her bum three times. Song Ji Hyo chose her mother’s name, and started to carry out the mission.

As she wrote her mother’s name with her bum, Gary spotted her. He said admiringly, “There is nothing Ji Hyo can’t do.” Then he also added, “I think she is writing my name…”

After successfully completing the game, Song Ji Hyo happily shouted out “I love you.” She meant it for her mother, but Gary, who heard it from afar, decided that Song Ji Hyo was claiming her love for him. Gary answered her, “Ok,” making everyone at the set laugh.