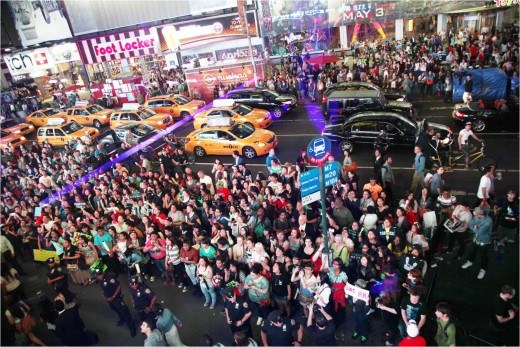 On May 20, a representative of B.A.P’s agency stated, “B.A.P, who are currently doing their ‘B.A.P LIVE ON EARTH PACIFIC’ tour appeared at the MTV Studio located in New York Times Square at 8pm on May 16. All the tickets for the Los Angeles, San Francisco, Washington, and New York were sold out in an instant. Fans surged into New York Times Square to get a glimpse of B.A.P.”

Nearly 3,000 people showed up for the red carpet that was planned from 7pm. 30 more personnel from the NYPD were sent in and an ambulance was also prepared. MTV provided B.A.P with a Cadillac limousine, 20 security guards, and more than 100 staff members.

B.A.P thanked fans through the live MTV-K that began at 8pm, “We are happy because it feels like we have made a dream we had for a long time, come true.”

B.A.P finished up their U.S. tour as of their May 17 New York concert. The “B.A.P LIVE ON EARTH PACIFIC” tour will continue on to Japan, Taiwan, and Hong Kong.