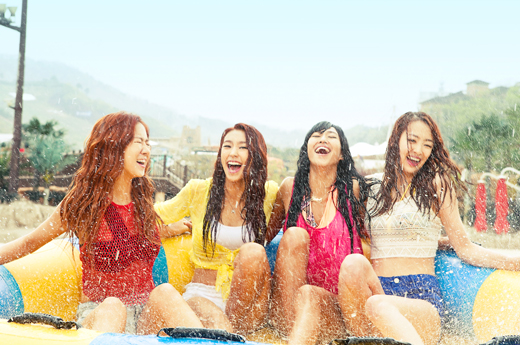 SISTAR Puts on Hot Pants as Models for Ocean World

Sexy girl group SISTAR has been chosen to be the models for the water theme park, Ocean World.

The ladies of SISTAR were decked out in hot pants, bikinis, and tank tops to show off their curvy and sexy bodies as they carried through the photo shoots and CF filming sessions.

After releasing hit after hit, SISTAR is once again gearing up for a come back in the near future. Even with their busy schedules, it is reported that the girls had a lot of fun and actually seemed like they came out to enjoy themselves while filming.

Ocean World’s reps commented, “Soyu, Bora, Hyorin, and Dasom are beautiful, healthy, charismatic, skilled in singing and stage performance, and have good variety program skills. We believe that their endless charms and fun image fit perfectly with our water park, which is why we chose them as our models.”

They also stated, “We are excited to see the synergy effect of our newly opening Super Wild River park in early June along with SISTAR’s come back.”

SISTAR’s Ocean World CF will start airing on television at the end of May.

SISTAR
Ocean World
KPLG
How does this article make you feel?