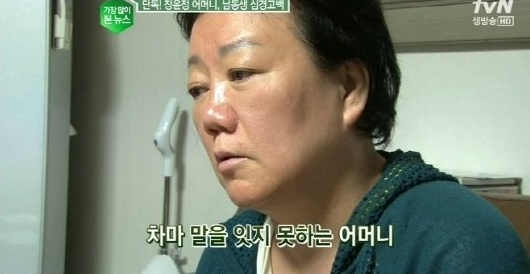 Jang Yoon Jung’s Mother: “I Raised Her for 33 Years and She Treats Me Like This”

On May 23, tvN’s “E News” aired a special with the mother and brother (Jang Kyung Young). He said, “My current company took a huge hit [from the scandal]. Because of the press coverage, the company became a victim and its credibility was questioned. The honest company needs time to regain its image from the tarnished reputation,” and, “I’ve never caused Jang Yoon Jung any trouble. Her debt is because she didn’t take care of her savings properly. She previously said that she didn’t have any problems managing her funds.”

Her brother continued, “I lived quietly because I didn’t want to be a burden to my sister, but it’s ridiculous how she brought us down. The situation became like this and I can’t understand how she can just leave it be. She wasn’t like this. I’m worried that our relationship looks strained. She’s preparing to get married so I want to be careful that I don’t want to rain on her parade. However, I think regaining the company’s reputation is the right thing to do for the sake of my co-workers. I’m not trying to attack.”

Her mother also gave her input. “My heart hurts. It’s a shame that other people know about our family’s issues and I wonder why she did that. Why did she backstab her mother who took care of her for thirty-three years? I’m fine, but why did she do that to her brother”

Her mother added, “I feel concerned about Do Kyung Wan who will marry her. I found out they’re getting married through the press. She didn’t give us an opportunity to talk and made us like this with her scary words.”

Meanwhile, Jang Yoon Jung didn’t give a comment regarding the latest interview with her mother and brother.