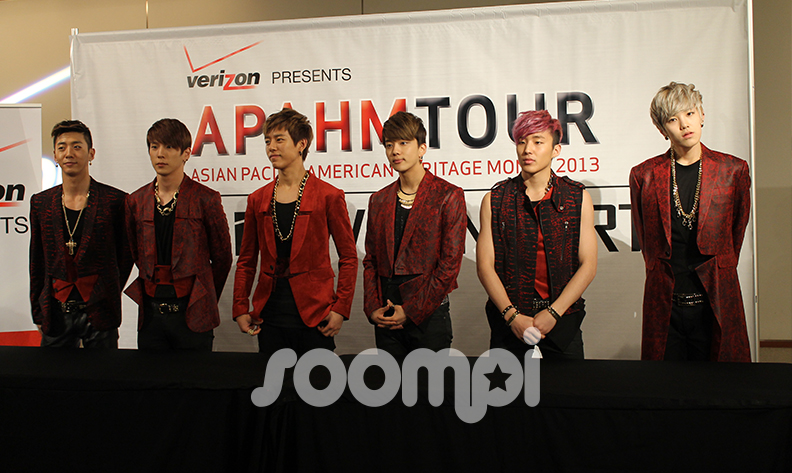 On May 14th and 17th, boy group B.A.P stopped by Washington DC and New York to treat fans to an unforgettable show as part of the Verizon Presents APAHM Concert Tour 2013: B.A.P. LIVE ON EARTH tour. Prior to the concert, Verizon sponsored an official meetup for the fans, and gave out opportunities to personally meet B.A.P in through a meet-and-greet “high-touch” event. Check out Soompi’s coverage of the pre-show meetup and high touch below!

Despite having just debuted in 2012 (can you believe that it was just last year?), B.A.P’s skyrocketing popularity sold out a 10,000-seat four-city tour in the US within one hour. With continuously impressive single hits and a steadily increasing fanbase, it’s no surprise that many Babyz also made an appearance at the pre-show meetup to try to win the chance to interact with the group in person.

Excited fans pose for the camera in hopes of getting a scratch-off card.

Verizon had previously announced that only 100 lucky fans at the meetup were given the unique opportunity to participate in an “high-touch” event, and the eligibility of those 100 fans were to be determined by scratch-off cards given out during the meetup. On the main stage of the venue, fans battled it out through dancing, singing, and cosplay competitions, while other sections of the room played host to various other B.A.P related activities that had fans answering variety questions about B.A.P or taking a picture in support of the tour. Each participating fan was then given a scratch-off card; only 100 cards held the opportunity for the fan to to attend the high-touch, while others simply suggested fans to “try again.”

A pile of unsuccessful scratch-off cards.

100 lucky fans wait in anticipation for their idols.

Immediately after the meetup event, lucky high-touch winners were ushered into a straight line in preparation of B.A.P’s appearance. A roar of screams echoed through the venue as B.A.P entered as fans frantically try to catch a glimpse of their favorite idols. If you’re not familiar with the “high-touch” event, it is a new meet-and-greet method that is being used by celebrities during fan events in Asia. Essentially, this translated to each member of B.A.P giving the lucky 100 fans high-fives. Can you imagine touching members of B.A.P? Eep!

Slowly, these fans made their way down the line one by one, exhilarated with their once-in-a-lifetime opportunity to physically interact with B.A.P. Some fans were excited to the point of crying, while others just screamed in excitement. Though the event itself was short, fans were satisfied to get the chance to see B.A.P in person (and as a small bonus, listen to them introduce themselves). However, despite the protest of the fans, the event quickly came to a close as B.A.P said their goodbyes, promising the fans a great show later on that night.

The B.A.P frenzy will continue with part two of our coverage of their concert tour: the actual concert itself! Did you attend B.A.P’s fan meetup? Let us know in the comments below!