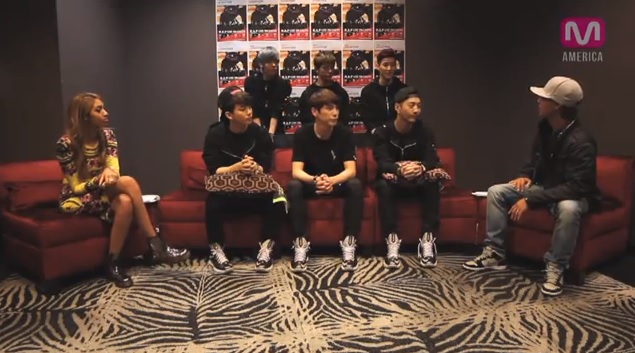 Danny From LA Interviews B.A.P for “Live on Earth Tour”

1TYM‘s Danny had a chance to interview the members of B.A.P. for Mnet America‘s “Danny From LA” when the group came to Los Angeles for their “Live on Earth Tour.“

In the video Danny met some of the fans who were eagerly waiting in a very long line for the concert at the Club Nokia. The fans, all decked out in their B.A.P. t-shirts and signs, were clearly very excited for this concert. Danny teamed up with Mnet America reporter Morgan Lynzi to attend the concert and sit down with an interview with B.A.P. after the concert. During the interview the boys of B.A.P. answers questions about the tour, ideal types, and their music inspirations.

B.A.P. currently wrapped up their U.S. tour last week and moved on to Asia with a recent concert in Japan.

1TYM
bap
KPLG
Danny
Danny From LA
mnet america
How does this article make you feel?