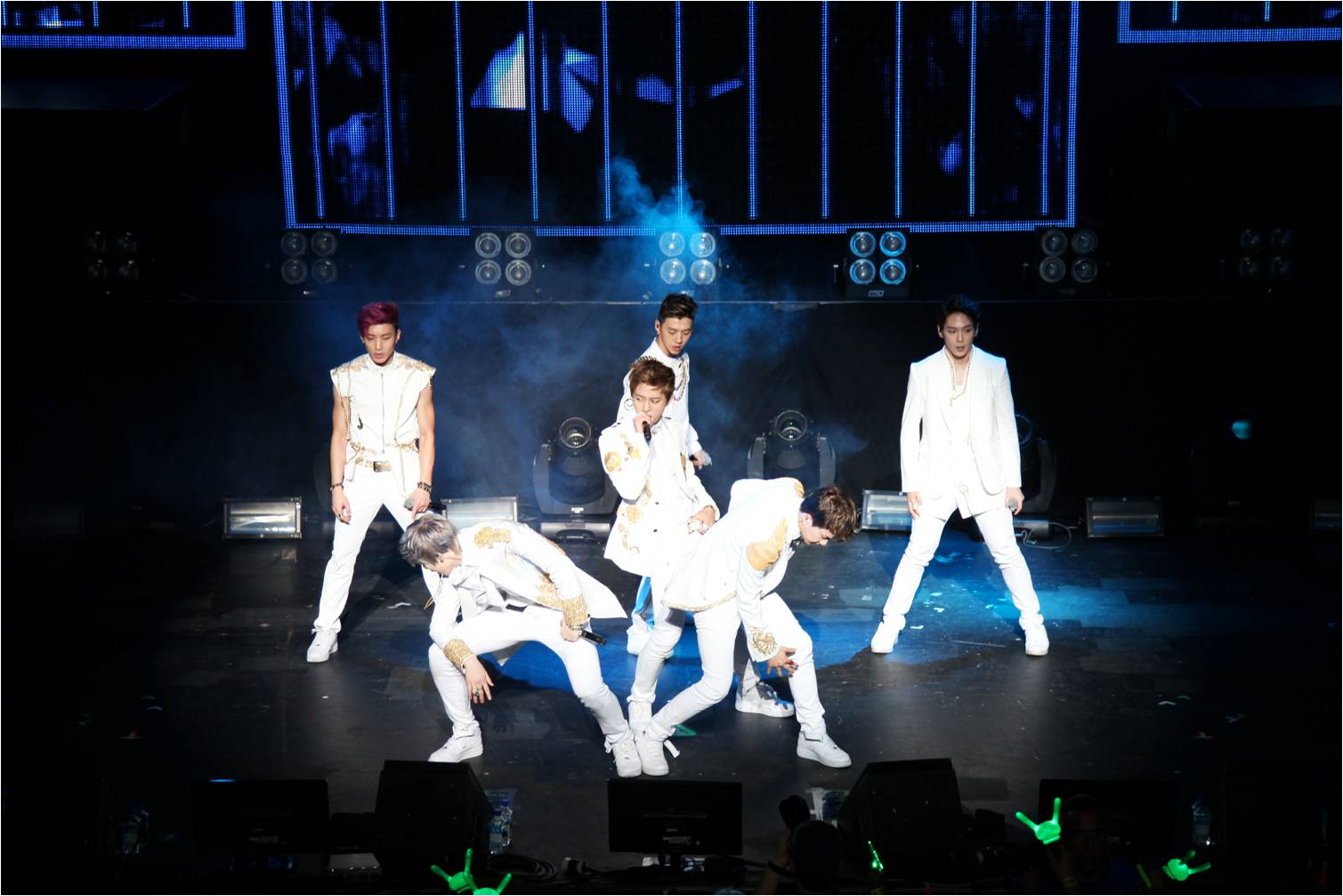 Earlier this month, boy group B.A.P held a four-city US tour as part of the Verizon Presents APAHM Concert Tour 2013: B.A.P. LIVE ON EARTH, and Soompi had the opportunity of attending the DC stop of their tour! Also, if you haven’t already, make sure to also check out our coverage of B.A.P’s meet-and-greet and pre-show meetup events!

Fans began lining up outside the Warner Theater in DC several hours early in anticipation of the concert that night, with the lines wrapping all the way around the concert venue. Excited fans waved their handmade banners in the air, constantly chanting the three letters of B.A.P.

MC PK (Paul Kim) humorously led in the start of the concert, claiming that K-Pop fans are the best fans in the world, and that he would honored if his children grew up to become K-Pop fans, arousing more screams from the audience. The concert kicked off with the performances of New Heights and YouTuber Joseph Vincent, whose melodic voices served as the perfect prelude for what’s to come.

The lights lowered, and the screaming continued. Six shadows appeared on a raised platform, with a white fog looming in the distance. A rough, low voice murmured: “Warrior’s back.” The opening bars of Warrior blasted through the speakers, and was rewarded roaring of the crowd. B.A.P, now shining under the spotlights, proceeded directly into a perfect formation, asking the crowd “What’s your B? A? P?”

Without pause, the boys launched right into “What the Hell,” their charismatic voices and dances unfazed by the continuous screaming of the fans. “No Mercy” was next; its familiar “boom clap boom boom clap” had the crowd on their feet singing along, with a powerful, unified “No, no, no, no mercy” spreading through the venue during the chorus.

To the dismay of the fans, the boys went offstage for a quick costume change, leaving in their place a video transition. Soon, members Bang Yongguk and Daehyun came back onstage to perform an acoustic version of the duet “I Remember,” captivating the hearts of all the fangirls in the audience. Though this song originally featured BEAST’s Yoseob, Daehyun’s power vocals completed the song more than perfectly. The slow-paced atmosphere was continued with the appearance of Jongup, Himchan, Youngjae and Zelo, who sang “Secret Love.” Five chairs appeared on the center stage, and the members reunited for a picture-perfect performance, mesmerizing fans with “Rain Sound.”

The lights went up, and it was time for introductions and greetings. After formally introducing themselves as a group, each individual member laid out some fun facts for the fans. Through this, we learned that Bang Yongguk is a “sports fanatic,” Himchan’s talent was “turning his eyes inside out” (with much embarrassment, he was forced to show us this by the rest of the members), Daehyun can reach “7-high notes,” Youngjae “recently lost his baby stomach fat,” Jongup has a “remarkable six-pack” (he complied with the audiences’ unspoken requests by quickly lifting up his shirt), and that one of Zelo’s talents was to “LTE rap” (the other was, apparently, to grow taller – he’s over 6 feet and still growing!). Though they might have powerful and charismatic stage presence when performing, B.A.P is also truly a “variety” group, playfully and humorously interacting within themselves to bring laughter to the fans.

The fan interaction was all too short, as the rest of the members retreated offstage to leave Daehyun and Youngjae to cover R.Kelly’s “I Believe I Can Fly.” There are no words to describe how perfectly their two voices blended together in harmony to create one of the most beautiful and breathtaking performances of the night. Jongup and Zelo soon upped the pace, riling the crowd up with their energetic rap and dance, as they performed “Teach Me How to Dougie” and “Never Give Up.” Bang Yongguk and Himchan’s duet stage was equally dynamic; Yongguk, having reinvented himself into the DJ, launched into “Sexy Clap,” and was soon followed by Himchan. The boys did not waver once in their energy, and had fans on their feet jumping with them, completing one of the most compelling and vivacious stages of the concert.

“One Shot,” the main track on B.A.P’s newest EP of the same name, was next. It’s hard to believe that these boys only made their debut one year ago – though it was nearing the end of the concert, they did not show any sign of being tired. Immediately after, the boys delivered “Punch,” “Fight For Freedom” and “Power.” Their performances were flawless; the members was perfectly inline with one another in their choreographies, not missing one step.

All too quickly, it was almost the end of the concert. The members paused, formally bidding the audience farewell and thanking all of the fans for their support, and fittingly ended the concert officially with “Goodbye.”

But it was not over yet. As the still-excited crowd chanted “encore, encore, encore,” B.A.P returned to the stage to perform their last songs of the night, “Dancing in the Rain,” “Stop it,” and “Crash.” These three songs were filled heavily with fan interactions; the members focused on fulfilling the last wishes of the fans, even taking selcas for some of the audience members. It was a perfect ending to a perfect night.

B.A.P is currently continuing their Live On Earth tour in Asia. If you have the opportunity, make sure to catch them performing live!