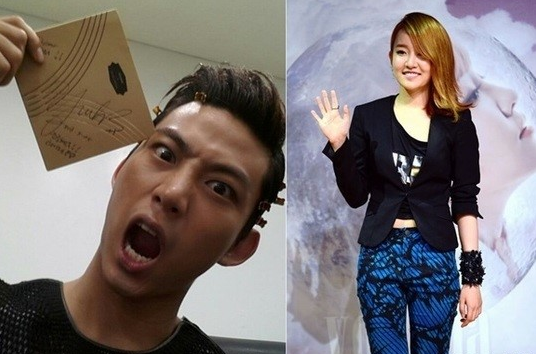 On May 25, 2PM member Taecyeon updated his twitter with a photo of a signed CD that Younha had given him. He also tweeted, “I got a CD~♥ Next time I’ll personally buy a CD and get it autographed~” In the photo, Taecyeon holds the CD to his head and makes a humorous facial expression with his stage make-up still on.

Singer Younha also tweeted in response, “Hehehe, thanks! I’ll enjoy listening to your CD as well.” The two singers are reported to have always been good friends, born in the same ’88 year.

Twitter folks who saw the warm, cordial tweet exchange retweeted Taecyeon’s post about 1000 times at one time and assisted Taecyeon with giving Younha’s CD more publicity, a sweet gesture from Taecyeon and the HOTTEST fans.

In related news, 2PM is currently promoting “Comeback When You Hear This Song” and “A.D.T.O.Y.” while Younha is promoting “The Real Reason Why We Broke Up.”

Taecyeon
Younha
KPLG
How does this article make you feel?