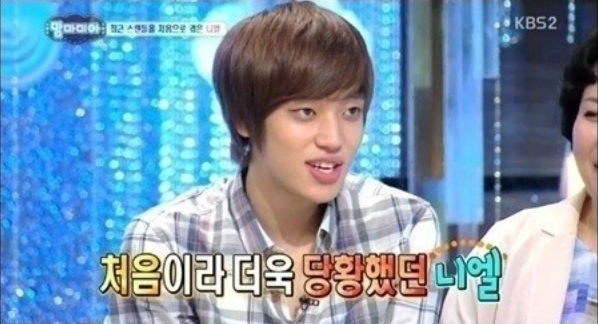 On the recent episode of KBS’s “Happy Sunday – Mamma Mia,” which was aired on May 26, Teen Top’s Niel and his mother appeared as special guests.

During the show Niel’s mother mentioned Niel’s recent scandal. On MBC’s “Radio Star” on May 8, Shinhwa’s Andy revealed that a girl group member “S” from JYP Entertainment has showed interest in Niel romantically.

Niel’s mother said, “(Niel) had a hard time. Unintentionally, he has hurt some people, and there was nothing he could say at the time to help. He was depressed.”

Niel stated, “This was my first (scandal), and so I didn’t know what to do. There were a lot of things people misunderstood.”

Niel’s mother added, “I felt helpless, and there was nothing I could say. In addition, there were other things that were going on at the time. That was a very long week. Niel asked me and his father not to argue because of this incident, and he tried to console us. He was having the most difficult time, yet he tried to help us. At that moment, I knew he has matured a lot.”

She then told Niel, “As we live, there will be even greater hardships we must face, but we will always endure them with optimism.”

Fans that saw this episode commented, “Niel must’ve had a difficult time,” and “A careless remark caused so many problems.”