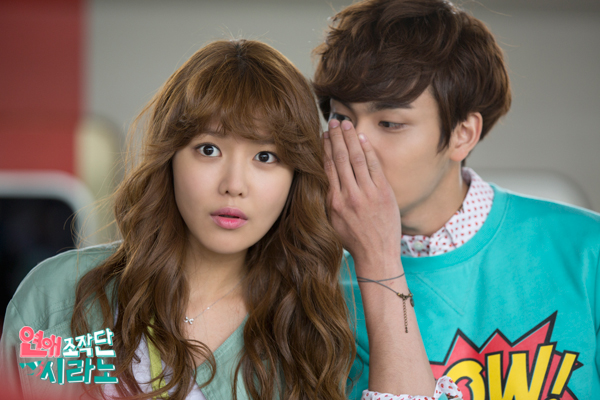 On May 26, Sooyoung posted on Girls’ Generation’s official homepage, “thump thump~ It’s not long before the first episode airs and am nervous! Even though it’s not my first time [acting], I get a little nervous whenever a teaser or advertisement is released [from ‘Dating Agency: Cyrano‘].. everyone also shares the same feelings, right? Even so, got strength from seeing members who made time from their scheduled activities in Thailand and foreign Sones.”

She went on, “We also received loads of rice, mangoes and dog feed from various countries at the press conference. Thank you so much. I’m really touched. I’m receiving strength from your sincerity.”

“I received the script several months ago while on tour and tried to prepare in my spare time, but I feel like I’m lacking much. And I would send the director an urgent request right before going abroad for scheduled activities.. and when I meet with the director to go through the script, senior Lee Jong Hyuk was so encouraging when he graciously made time to join the meeting.. (At the press conference I said that he called me to meet, but I was babbling on and made a mistake. There seemed to be misunderstandings from it.) He is a reliable senior and always makes things comfortable at the filming site.”

“I also like all the other senior actors. I seem to have awesome luck with being surrounded by great people. I wanted to work in an inviting environment like during ‘The 3rd Hospital.’ I’m really happy that I’m able to show another story through a different medium. It’s not too long before the first episode airs. Wonder what part of Sooyoung Min Young will resemble.. Please show lots of love and find which parts are similar. Please tune in!”