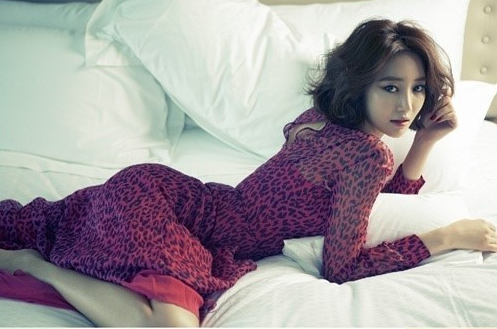 For the shoot, Go Joon Hee wore a dark pink, sheer, leopard-patterned dress while striking various alluring poses in the bedroom. What especially caught the attention of netizens, however, was Go Joon Hee’s smoldering gaze and sexy appeal. Go Joon Hee has also been gaining recognition for her exceptional taste in fashion and style, with whatever item of clothing she chooses to wear.

Go Joon Hee is also actively participating in season 4 of “We Got Married” as the pretend wife of 2AM member Jinwoon. She has also taken on a role in upcoming romantic comedy flick “The Eve of Marriage” along with actors Lee Hee Joon, Kim Kwang Woo, Kim Hyo Jin, Joo Ji Hoon, Lee Yeon Hee, and 2PM member Taecyeon. The film is scheduled for release later this year.

Go Joon Hee
We Got Married
KPLG
How does this article make you feel?