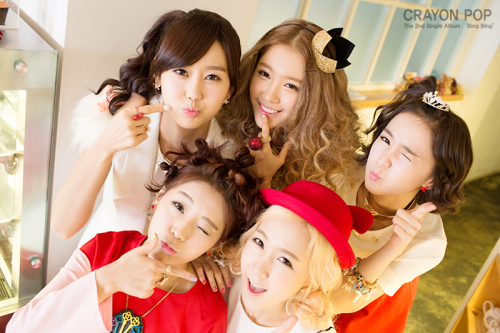 As much as the cute, five-member group is rising with fame, Crayon Pop is also facing more difficulties. Recently, Crayon Pop’s official site made an announcement, asking fans to stop giving presents and to give money instead, which will go toward a good cause. However, fans were not pleased at the request for money, putting Crayon Pop under a negative light once again.

On August 26, the announcement read, “As much as your love for Crayon Pop is growing, the members are receiving many gifts,” and “We are genuinely thankful but since Crayon Pop’s fans are increasing very quickly, we cannot keep up with all the gifts so we are posting this announcement.”

The announcement continued to state that the group will not be accepting any more gifts that are handed to them physically or come by the mail. Instead, the agency asked fans to send money in a special Crayon Pop gift account, which will be used to make a donation to charity. The announcement read that the amount of the donation will be posted for everyone to see and that the money and gifts spent on Crayon Pop would find better use in helping out those who are in need.

Chrome Entertainment’s CEO Hwang Hyun Chang also posted, “We know that the gifts that the fans have sent show their love and devotion toward Crayon Pop. The many gifts from the fans are hanging on our walls and are displayed in our building.”

“However, the reason for not accepting any more gifts is because people started to give expensive, designer brand gifts to the members, which made them feel burdened. Of course, they were grateful but they also felt bad. Expensive gifts are burdensome for both the person giving and the person receiving the gift. These kinds of gifts may also cause other fans who are not as financially able or young student fans to feel out of place. Also, when the Crayon Pop members use or wear those gifts, it might raise up more issues.,” he continued.

“The standard of an ‘expensive’ gift may differ with each person so we cannot pinpoint an exact amount and we cannot decide on an exact standard on which gifts can be accepted and which cannot. We also cannot ignore the devotion of the fans either so we needed a method that was fair,” he revealed.

CEO Hwang continued, “We decided the method that would please everyone would be donations but the way we decided to do it and the words that we used were not thought out properly or well enough so we apologize.”

CEO Hwang asked fans to understand as the company is still in the process of developing. He also added that they will continue to uphold the no-gifts policy and that they will come up with better ideas for this matter.

He ended with, “I really hope you understand that we feel it’s better to share the love and devotion you give to Crayon Pop with others who are in need. That will be a more precious and valuable gift to Crayon Pop and the members are happy and grateful enough by just receiving your love,” and “I apologize once again for causing worry through our poor choice of words and expression and please continue to love Crayon Pop.”

Chrome Entertainment
KPLG
Crayon Pop
How does this article make you feel?