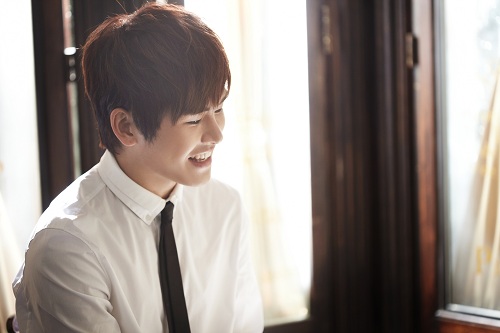 Infinite’s fans know that Hoya’s real name is Lee Ho Won, and that “Hoya,” is simply the singer’s stage name. However, Hoya’s recent comments on KBS2TV’s’ “Cool Kiz on the Block” indicated the possibility that Lee Ho Won isn’t his real name either. On the March 11 broadcast, the Infinite member appeared as a guest of the show for the Taekwondo edition, displaying his athleticism. As the singer walked side by side with MC Kang Ho Dong, Hoya expressed, “it’s an honor to be able to do a show with you.” Delighted to hear such praise from his junior colleague, Kang Ho Dong said, “Our names, Hoya and Ho Dong are even similar.”

However, Hoya shockingly responded, “Honestly, my real name is not Lee Ho Won. Everyone knows it as Lee Ho Won, but that name is also a changed name. My original name was Lee Ho Dong. I changed my name because of you,” causing the MC to become surprised. The hilarious story behind Hoya’s name change caused Kang Ho Dong to laugh with pity as the MC commented, “It feels good, but sad at the same time.” Is Hoya joking or telling the truth? We aren’t for certain, but watch “Cool Kiz on the Block,” to find out. The KBS2TV show airs on March 11 at 11:20PM (KST).

Cool Kiz on the Block
Hoya
INFINITE
Kang Ho Dong
How does this article make you feel?