SHINee’s Onew and actor Seo Ha Joon were unsuccessful in hunting a monitor lizard (a type of large lizard).

On the May 2 broadcast of SBS’ “Law of the Jungle” in Borneo, Onew and Seo Ha Joon came across a monitor lizard, but after failing to catch it, they showed great disappointment.

The two of them initially set out with a casting net to catch fish, but on the way there, they found a monitor lizard. Due to the large size and intimidating nature of the lizard, the singer and actor hesitated in catching it. During that time, the lizard was able to run away.

Seo Ha Joon said, “It was disappointing, but since there was a lot of other food to eat, it made me feel a little better.”

Onew also expressed his disappointment, “As soon as I saw it, I thought of food so I went after it but in the end we were unsuccessful.”

This episode of “Law of the Jungle” was the last part of the show filmed in Borneo. 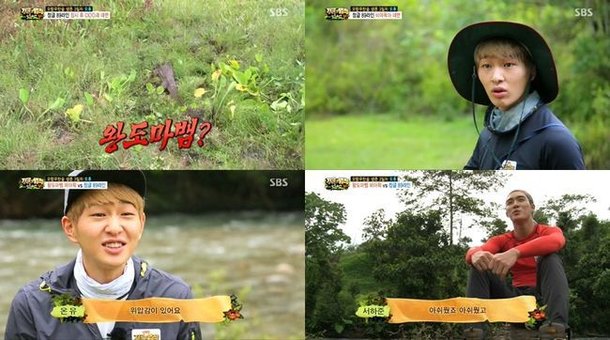 SHINee
Law of the Jungle
Seo Ha Joon
Onew
How does this article make you feel?