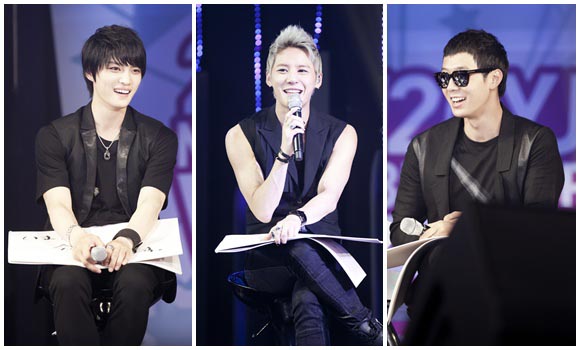 JYJ will heat things up this summer as the group holds their third annual membership week from July 31 to August 3.

According to C-Jes Entertainment on July 16, JYJ will hold the “2014 JYJ Membership Week” at COEX Halls C & D in Samsung-dong, Seoul for four days starting July 31 to August 3. It is a free event that allows the group to meet their fans and converse with them.

Under the theme “Everything of JYJ’s Music,” the third annual event that started in 2012 is to be held at a 16,500 sq/m space wherein fans can see various exhibits including a “dress room” with about 600 of the group’s costumes from their music videos, previous concerts, and performances will be displayed and a “set room” which contains the set from their new album’s music video.

The annual event is received positively for the new direction that it takes in order to showcase hallyu contents.

In other news, JYJ will be making their official comeback this summer with a new album. The group will also be holding the first leg of their Asian tour on August 9 in Seoul.