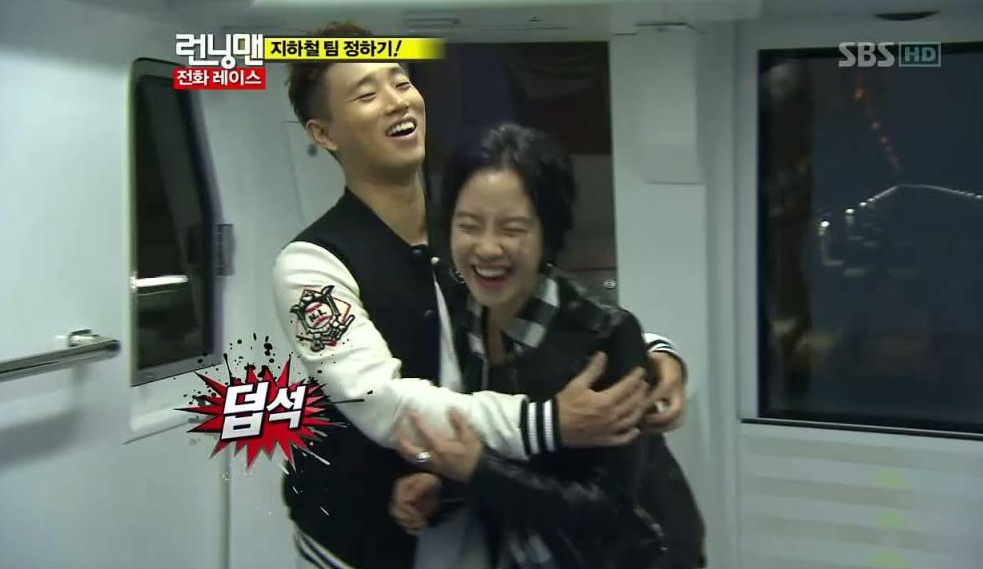 Four years of “Running Man” have left us with countless unforgettable moments as well as numerous nicknames, characters, and pairings, such as Spartakooks, Icon of Betrayal, and Pil Chok Cross. But none are as popular as the beloved “Monday Couple,” composed of members Song Ji Hyo and Gary. This couple has enjoyed long-running popularity and support from fans since its formation, and 2014 was no exception with so many memorable moments of sugar-sweet affection and adorable jealousy.

Let’s revisit the top 10 moments from the Monday Couple in 2014 and see why fans can’t help but the ship the two. The moments are numbered from 10 to one based on the popularity of each article on Soompi.

Updated October 25, 2016: With Gary’s announcement on October 25, 2016 that he would be leaving “Running Man,” these moments have become even more poignant and reminiscent.

The couple were separated into opposing teams and had to engage in a staring battle. Determined to win, Song Ji Hyo showered Gary with aegyo in an effort to weaken him.

Shin Min Ah and Jo Jung Suk were guests on the “Wedding After Dating” race episode. Gary was paired with Shin Min Ah while Song Ji Hyo was partnered up with Jo Jung Suk. The pairs had to play the “Pepero” game where a couple starts chewing up a Pepero stick from opposite ends, trying to end up with the smallest piece possible to win. For this particular game, however, noodles were used instead of the chocolate stick. Gary was very happy with his new partner and forgot all about Song Ji Hyo.

In this special episode, Gary kissed Song Ji Hyo in hopes of being the prince who can save her. How many fans swooned over their fairy tale kiss?

Even when paired with another woman, Gary couldn’t lie to his main lady. When suspected of being one of the mafia in the “Mafia Game,” Gary acknowledged that Song Ji Hyo knows him well enough to detect when he is lying or not.

Watch part one of the Mafia Game episodes:

6. Gary gets jealous over Song Ji Hyo’s teamwork with another man

In a special time travel episode, Song Ji Hyo was able to duplicate three more versions of herself. Gary couldn’t hide his love for all versions of his “Monday Couple” partner and declared his love for each one.

4. Gary asks Song Ji Hyo to date him for one month

Fans squealed in delight when they found out that Gary had asked Song Ji Hyo to date. Viewers will be looking forward to seeing the couple possibly take their relationship to the next level in 2015.

3. Gary and Song Ji Hyo are jealous of each other’s partners

Despite being paired up with different partners, the Monday Couple couldn’t sever their feelings and experienced lots of jealousy when Song Ji Hyo was partnered with Lee Dong Wook and Gary was paired up with Rainbow’s Jaekyung. Hilariously, it appears as though Gary is the more jealous one.

Watch part one of this two-part special:

Jealousy is a common element of the Monday Couple’s relationship. To Gary’s dismay, Song Ji Hyo was paired up with Park Seo Joon. They had to play the “Pepero” game where a couple starts chewing up a Pepero stick from opposite ends, trying to end up with the smallest piece possible to win. Instead of Pepero, “Running Man” used strips of pickled radish. Park Seo Joon and Song Ji Hyo were determined to win, so they ended up touching lips. Cue Gary’s misery~

The July 27 episode involved a cook-off that required members to eat South American cuisine and raise their heartbeats to 160 beats per minute. Discussing a past event when Gary kissed Song Ji Hyo managed to get their hearts racing. They continued to inch closer to each other in efforts to win the challenge.

What was your favorite “Monday Couple” moment of the year?