Without a doubt, Girls’ Generation is one of the most influential K-pop groups of all times. After their debut in 2007, they rose to fame and were dubbed “The Nation’s Girl Group.” While you may know their popular songs and have seen them in a variety of programs and dramas, there are some facts that you still may not know about this epic group. Want to know more? Click through the gallery for “9 Things You Probably Didn’t Know About Girls’ Generation.”

Starting in 2005, SM Entertainment decided to make a female counterpart for Super Junior. Because of that, the girls were actually known as the “Super Girls” during their trainee years. They originally consisted of 11 members before undergoing some changes and debuting as a nine-member group instead.

During dorm life, they agreed upon many rules to keep their household running smoothly. From playing “rock, paper, scissors” to decide the order of their showers to writing their initials in their underwear to keep them separate, the girls established many rules for their home. One such rule was that the first one to wake up had to make breakfast, while the last one to wake up had to clean up everything. Since Jessica loved to sleep late, she almost always was the one to clean! 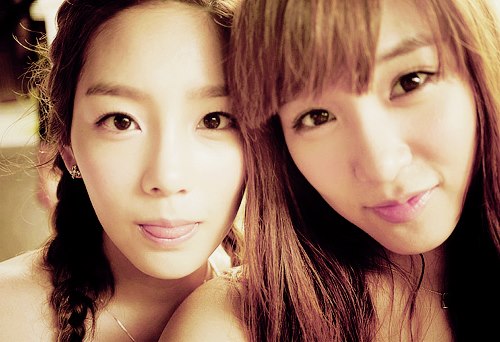 Some of the girls have been together since the age of ten. As a result, their relationship is like one of true sisters. Like real-life sisters, the girls have admitted to some pretty serious fights with each other. At one point Taeyeon and Tiffany had such a huge fight, that their concert in Japan was almost canceled as a result. Thankfully, the girls made up and the show went on!

Some of the members were already involved in the entertainment industry before they signed with SM. YoonA had gone through about 200 auditions for various music videos, films, and dramas. Sooyoung was a member of the pop duo Route θ, but the group disbanded one year after their debut. After training with SM for five years, Sunny eventually signed with the label Starworld in order to debut in a duo called Sugar. The duo never debuted, however, and Sunny returned to SM to become a member of Girls’ Generation.

One time, the girls decided to go to an amusement park and enjoy their day off. Fans noticed they were there and took a lot of pictures of Sunny, Hyoyeon, Jessica, and Tiffany. When their company saw the pictures, they grew very angry that the girls had gone to the park without wearing any makeup. They wanted them to be more careful about their image and told them, “Next time you go out on a trip, wear make-up!”

The group released their first album in the USA in 2011. During their promotions, they performed on the “Late Show with David Letterman” and “Live! with Kelly,” thus becoming the first Korean stars to appear on these mainstream, American television shows.

Tiffany once admitted on TV that they like to go to bars and bond together over drinks. She said that the members with the worst drunken habits were Sooyoung and Jessica. According to Tiffany, Sooyoung becomes extremely hot-tempered and Jessica becomes a “telephone demon.” Would you mind if Jessica drunk dialed you?

An earlier version of this article misstated when Hyoyeon was named instead of Jessica.

The pressure of being the leader grew so great, that Taeyeon began to sleepwalk as a result of her stress. Sooyoung once admitted, “When Taeyeon sleeps, she solves math problems. Even though she’s alone she greets someone. In the middle of the night, she would also start using her phone. It was scary.” After dealing with all that stress and an additional incident where the members had hurt her feelings, Taeyeon wanted to retire from her position as leader. She even stated on a television program, “This is something I haven’t talked about before on broadcast….I stepped down from the leader position in So Nyeo Shi Dae.” Thankfully, she and the girls worked out their problems and she returned to being the leader soon after! Jessica is a person who requires a lot of sleep. On her off days, she could even sleep up to 16 hours and would only wake up when her members made her. One time during filming, Jessica disappeared. For two hours, no one could find her. The staff started to panic and even thought of calling the police. After searching again, someone finally found her lying in the bathtub with toothbrush in hand, completely asleep!

BONUS FACT: Since 2010, this popular girl group got heavily involved in philanthropic and charity work. They have worked to raise money (as well as donated some of their own) for organizations like the Make-A-Wish Foundation, Red Cross Society, UNICEF, Korean Association Against Blindness and more. Many times, they have donated personal items to be auctioned off for charity. The group even once bought eight tons of rice with their own money and donated it to charity. It ended up feeding almost 70,000 people!

Did you already know these random facts about Girls’ Generation? If so, you are probably a hardcore fan! What other random facts should people know about these gorgeous girls? If you’re new to Girls’ Generation, which one of these facts surprised you? Let us know in the comment section below!

lee1086 is a Soompi writer who lives for music, playing the piano, and Eunsihae. Apart from her love for Super Junior, she is also a fan of 3rd Wave Music, BIGBANG, EXO, SHINEE, BTS, and more. When she is not watching the latest K-Drama or obsessing over the perfection of Lee Donghae, she is busy at church or hanging out with her family and friends.

Girls' Generation
Soompi Spotlight
How does this article make you feel?