Opinion: Why Sasaengs Happen in Korea

Sasaengs are one of the most peculiar features to K-pop and one that leaves many western fans scratching their heads. What motivates fans to wait in the rain for hours outside an idol’s house, hack into Twitter accounts, or break into dorms? Furthermore, how do sasaengs even know where idols live, or where they’re going to be? What is it about Korea that perpetuates sasaeng culture?

Although I’ve never been a sasaeng myself, in my three years of living in Korea, and two of being an active fan, I’ve brushed into sasaeng culture more than a few times. Before we even begin, let’s delve a bit into the fan psyche.

What makes a fan into a sasaeng, and furthermore, what is a sasaeng?

To begin with, I don’t think it’s unusual to want to get to know an idol better. One thing idols are extremely good at – and maybe even trained to do – is doing just the right amount of fanservice to make fans feel close with them, but not enough to actually tell them anything. At fan recordings, members will talk about funny stories about what happened the day before, what they ate for lunch, and other nonsensical anecdotes that make fans feel friendly with them.

Fans leave feeling closer to the idols because they’ve learned something that other people don’t know, and experienced a perceived “private” moment from their bias. The “dream” of having your idol recognize you is corporeal due to these interactions. However, at the same time, fans are left wanting to know more.

The reality is that after set schedules are done, a regular fan doesn’t know what happens in an idol’s private life, and although many may be curious, they’ll never act upon their curiosity. In contrast, I think sasaengs are a special breed of fan that are motivated to act on their curiosity, and it’s the desire to know more that moves them towards sasaeng behavior.

The industry feeds the fervor. Companies, and idols, are well aware of the fact that the image of “accessibility” helps out in the long run, why else would idols not be allowed to date? The tangibility of getting to know a celebrity drives fans crazy when they feel the threat to — what they may perceive as — their ownership of the idol. As it is, normal fans contribute, in various ways, financially to their favorite group. They may hire food trucks, buy albums in bulk, or simply buy expensive presents for the idols themselves. However, sasaengs take this support to the next level with more extravagant financial contributions. Although sasaengs may just seem like crazy fans to most westerners, they usually tend to be very strong, if not the strongest, financial supporters of their group – making companies, and to a certain extent, idols, reluctant to crack down on them.

The second question, what is a sasaeng, seems easy to answer at first – any fan that delves into the private life of a star – but after living in Korea, I’ve found that it isn’t nearly as black and white as it seems. If a fan plans on going to Japan and happens to know that their idol is going the same weekend, and they end up on the exact same flight (not by chance) – is that a sasaeng? What about if they happen to hear that their bias is at their family restaurant and they show up at the same time? Or if they know their idol is practicing at the company and they wait for them to leave? When does fan ardor cross the line into sasaeng behavior? A gray area exists that companies, and idols, don’t know what to do with – a level above normal fan but slightly below that of sasaeng, perpetuated by the ease in which fans can access their idols.

When we talk about Korea, the first thing to remember is that Korea is very small. A person can cover the country north-south in just four and a half hours by car. If you take the high-speed rail, that cuts the time down in half. In addition, unlike other countries which may have two or three major entertainment hubs, Seoul is the sole destination for music companies and artists.

This accessibility is key in encouraging sasaeng culture. Idols are within a short, and relatively inexpensive, subway, train, or bus ride away. In addition, they live very much like ordinary citizens. Unlike American celebrities, most Korean celebrities don’t live in cloistered mansions in gated communities with 24-hour security; rather, they live in ordinary – albeit, high-end – apartment buildings with 200 or more normal families. Although it may seem amazing that sasaengs are able to break into apartment complexes and rooms, it’s actually as simple as finding the apartment building and walking in. 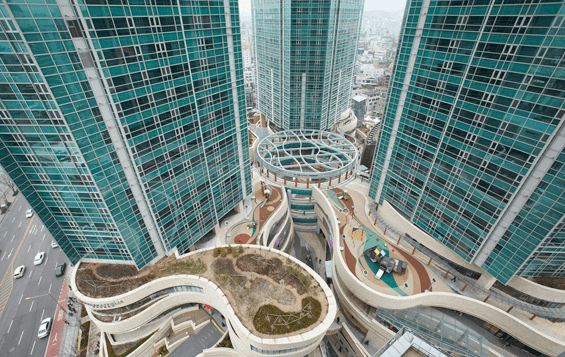 A high-rise apartment building that many idols are reported to live in.

In addition, idols are active enough that usually fans can see their bias at least once a month, if not more. There are also opportunities to interact with them one-on-one through fan signings or passing along letters and gifts at live recordings. Most idols also run restaurants or cafes, so even if they might not recognize you, their mom who owns the restaurant will. If you show up enough, they’ll know who you are. Also, due to the rapidity of the digital age, it’s extremely easy to keep tabs on your oppas and unnies – as long as you know the right people.

I personally witnessed the power of the fan information network when, on one of my quiet days off in Seoul, I visited INFINITE’s cafe in Seoul. A frequent attendee of music shows and recordings, I had started to be recognized by more frequent fans, and they updated me on the status of the idols. They knew Sunggyu was in the building because someone had been sitting outside the cafe hours before when he walked in. They knew that Woohyun may make an appearance at his BBQ restaurant later that day because their schedule was free, but he wasn’t there yet. They knew exactly when Sungyeol appeared in his chicken restaurant and rushed over immediately to see him. In the digital age, the communication between fans is constant, and with Korea being such a small country, it’s impossible for idols to hide.

Once, in a back alley near the Woollim Entertainment building, an upset fan lamented to me about her idol. She had come to Korea for INFINITE, spent thousands on INFINITE, ran a fansite for INFINITE, and took pictures for INFINITE. Yet, why – she fumed – would her bias not pay more attention to her? The idea was mind-boggling to me. To be so invested in an idol that his (perceived) actions would actually make her upset – was it actually worth it? I asked her and she paused before responding, “I honestly don’t want to marry him or date him, and I’m not stupid enough to think that that will happen. All I want is for him to know who I am, to know my name, and my face. That’s all I want, and that’s why I do this.”

So, Soompiers, what do you think? What makes a sasaeng, and how far is too far?

harmonicar is a former teacher who once taught at CNBLUE’s Yonghwa’s high school in Busan, and has attended close to 100 K-pop concerts. She is an avid INFINITE fan and was once served beer by Sungyeol in Seoul.

Soompi Spotlight
sasaeng
How does this article make you feel?