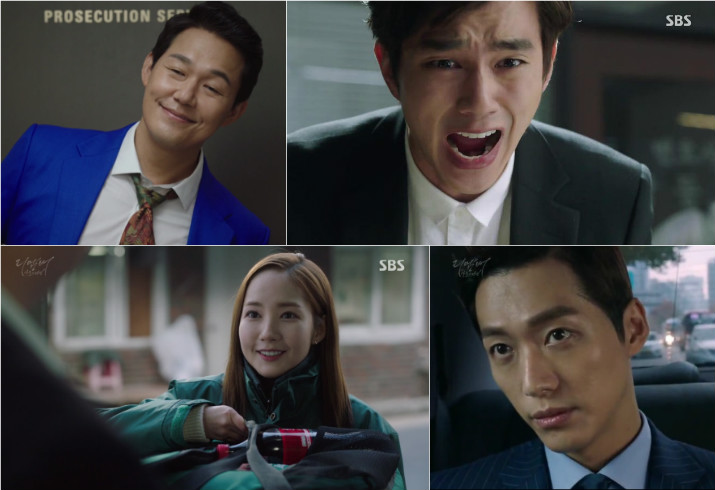 “Remember,” the most recent melodramatic thriller from SBS, starts off on an interesting foot — with a heart wrenching dream sequence, the grim present, and then a long, wild toss into the past.

Still a high schooler in the flashback, Seo Jin Woo (Yoo Seung Ho) is tenderhearted and innocent, but not naive thanks to his hyperthymesia; a condition in which one possesses an almost supernaturally perfect memory. His world is his father, Seo Jae Hyuk (Jun Kwang Ryul), after losing both his mother and a sibling in a car accident; and while they lived happily together, Seo Jin Woo was completely unaware of his father’s developing Alzheimer’s.

That is, until his lost and confused father wanders into a forest near home and stumbles upon the dead body of the pretty neighborhood noona, Oh Jung Ah (Han Bo Bae). From there, Seo Jae Hyuk’s disease escalates quickly as he’s unable to recall where he was all night… or even the fact that he has a son.

Despite his blank state of mind, Seo Jae Hyuk was still in the clear regarding the young woman’s mysterious death… until the public begins to protest the lack of updates on the investigation. Eager to quell their growing frustrations, the prosecutors assigned to the case decide to wrap things up quickly by pinning the crime onto Seo Jin Woo’s poor father…

And with that, we have the core of the story of “Remember.”

Although this is, technically, Yoo Seung Ho’s first drama comeback after returning from his military duties, I found him rather faded in the background instead of in the spotlight. He’s not quite the pinnacle of “Remember”… yet. However, that’s no fault of his own, as he’s pulling off the helpless and fragile, but boldly determined role perfectly.

I trust that his shining moments will come when we’re transferred back to the present and to the hardened Seo Jin Woo we were given a brief glimpse of in the very beginning. I’m eager to find out how much he has changed in the four years since his father was framed and I want to know how he has strengthened himself, what resources he has gained, and how he hopes to prove his father’s innocence and clear his name.

Undoubtedly the highlight of “Remember,” Park Dong Ho (Park Sung Woong) is a sassy, carefree, but incredibly successful attorney, who is, internally, still torn up over his father’s death. His business card boasts his 100 percent success rate when it comes to criminal cases and his techniques are refreshing. Half gangster and half legal beagle, Park Dong Ho isn’t afraid of getting dirty to ensure he wins his cases.

It’s mesmerizing to watch him smoothly bribe an upstanding prosecutor to join his side and to watch him go head-to-head with our villian Nam Gyu Man (Namgoong Min). The conflict between Park Dong Ho and Nam Gyu Man is not to be missed.

It’s no wonder that our leading man, Seo Jin Woo, would seek him out as the attorney for his father’s case. Despite Park Dong Ho’s hefty price tag, he’s the best of the best and that’s exactly what Seo Jin Woo needs.

In complete contradiction to the lovable Park Dong Ho is the psychotic Nam Gyu Man.

Have you ever encountered a villain so evil, he chilled you to the bone? Was there ever a time when the facial expressions and violent acts of an uncontrollable psycho made you slowly step away from wide-eyed fear?

I’m no stranger to actor Namgoong Min’s villainous side; I clearly remember him in “The Girl Who Sees Smells,” where he portrayed a famous chef by day and a prosopagnosic serial killer by night. But, if I thought that was creepy, then his character here is downright terrifying.

His drug and alcohol abuse aside, Nam Gyu Man is also filthy rich, as the sole third generation son of a conglomerate family, which means he has all the power. He’s an easily provoked walking time bomb, constantly consumed by fiery rage, and doesn’t blink an eye when it comes to violence, no matter how severe.

Although his “friends” don’t necessarily condone his behavior, they certainly don’t try to stop him either, and I suspect it’s partially due to fear. One of Nam Gyu Man’s friend even made the connection that Oh Jung Ah’s date of death coincides with the date of their party, in which she was their hired singer, and asked, “it wasn’t… you, was it?”

It’s an empty question, of course, because even if his friend had the confirmation, he wouldn’t step forward with it. It is this deadly combination that makes Nam Gyu Man unstoppable.

Unless Park Dong Ho gets involved.

The most puzzling role so far belongs to Lee In Ah (Park Min Young), the last corner of our main rectangle.

With their awkward first encounter when she falsely accused Seo Jin Woo of stealing her wallet to the way she suddenly began following him in silent support, what role will she play for our hero?

This quirky and scatterbrained law student is nothing if not loyal, however, even if it’s for reasons currently unknown. I can’t wait to delve into her character more and figure out what is motivating her continual approach toward Seo Jin Woo. Is it sympathy, or the belief that Seo Jae Hyuk is innocent after her own father spoke up in his defense?

Just like with Seo Jin Woo, I am eager to find out just how different present day Lee In Ah is. At the moment, since we’re still in flashback mode, she doesn’t capture much attention, but if Lee In Ah becomes more strong willed, intelligent, and legally savvy, then she would become quite the magnetic character and I, for one, can’t wait!

Even though I’m generally not a fan of large recollection scenes in the style “Remember” presents, this drama pulls it off so well with one smooth, swift punch that it’s nice heading into the drama with all the background information and groundwork laid out.

In a nutshell, the premiere knows how to draw viewers in and keep them coming back for more, which is what I definitely plan on doing. I anticipate a wild, but fun and intense ride as everyone’s fate eventually becomes entwined, for better or for worse. On a scale of 1 to 5, “Remember” starts off with a solid 4.0 with great potential to climb all the way to the top.

What are your thoughts on the beginning of “Remember”? Did you enjoy it as much as I did? Let me know your thoughts in the comments below!

If you’re not already watching the drama, you can start with the first episode below:

akinahana89 is a Soompi writer with a serious addiction to three things: K-dramas, coffee, and writing. When she’s not combining all three passions into one perfect evening, she’s keeping busy with her small Japanese restaurant, located on the east coast of the United States.