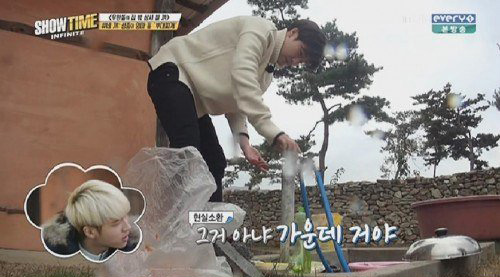 INFINITE’s Sunggyu Gets Scolded for His Poor Dishwashing Skills

On the December 17 broadcast of MBC Every1’s “Showtime,” INFINITE members cooked together while traveling through Ganghwado.

After eating a spicy chicken dish, the members decide who will do the dishes by playing rock-paper-scissors. In the end, Sunggyu ends up doing the dishes despite his protest.

As the oldest one of the members, Sunggyu was at a loss even from the get-go not knowing how to turn on the water. Seeing him fumble around, Woohyun yells out, “That’s not it. Turn the knob in the middle.” Soon after he starts doing the dishes, food trash quickly builds up in the drain and Sunggyu is upset. It’s because other members failed to remove food trash previously.

In order for the water to drain, Sunggyu has to pick up all the food trash to open up the waterway. Seeing this, Sungyeol blames Sunggyu for his poor dishwashing skills and all the other members joined in on the scolding. Woohyun and L especially come by aggravating Sunggyu further and picks on him. Sunggyu goes on to defend himself saying, “It’s not my fault. It’s because you guys didn’t do a good job before me.”

INFINITE’s “Showtime” airs every Thursday at 6 p.m. KST on MBC Every1.

Check out the clip of Sunggyu doing the dishes as a Sunggyurella being scolded by his evil stepbrothers.