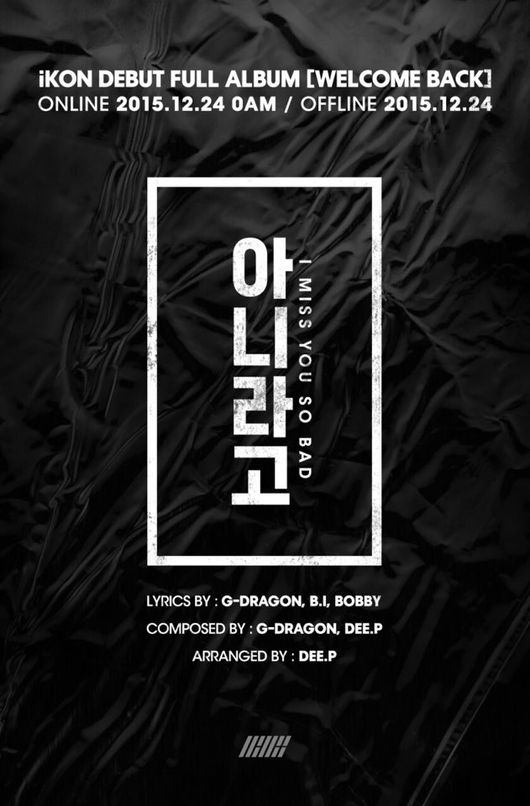 On December 19, a teaser image for iKON’s song “I Miss You So Bad” was released. This new song will be a part of the group’s upcoming debut full album which will be released on December 24.

The teaser image reveals that the song is composed by G-Dragon and DEE.P. Furthermore, the lyrics are written by G-Dragon, B.I, and Bobby while the song is arranged by DEE.P.

This song is gaining a lot of attention due to G-Dragon’s participation. It marks the first time that the BIGBANG member has worked on a song for someone outside of his own group.

It has been about three months since iKON has debuted yet they already have around 10 songs under their belt and more to come once their full album is released.

Their agency, YG Entertainment, revealed that G-Dragon worked on “I Miss You So Bad” as a demo song while preparing for BIGBANG’s album earlier this year. He felt that the song was more suitable for an artist other than BIGBANG and iKON happened to be recording in the studio next door so he called them over and had them record the song.

G-Dragon stated, “This song is a better match for you guys. It’s a debut present.” iKON was elated to receive such a gift from a senior they highly respect and admire. Even Yang Hyun Suk was said to have called G-Dragon himself to check this news.

Are you excited for this song?

iKON
B.I.
Bobby
G-Dragon
How does this article make you feel?