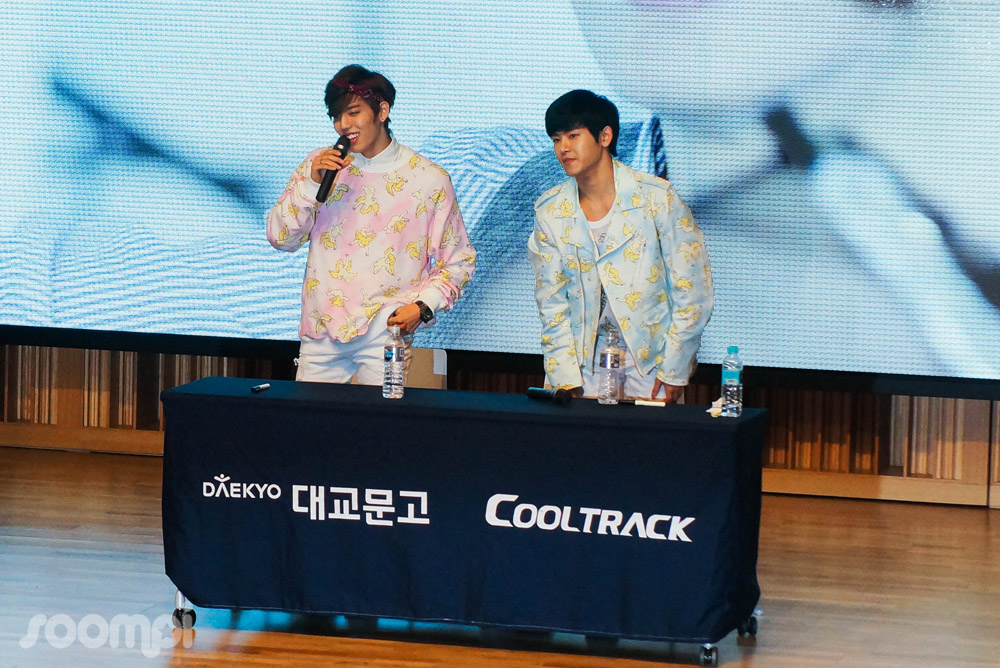 Ah yes, the beauty that is fansignings in Korea. Fansigns are one of the best ways to meet your idols face-to-face, and aren’t particularily that hard to apply for. However, it takes a lot of luck and a lot of money to make it in depending on your artist. We’ll breakdown the application process below.

The easiest way to figure out when your artist is having a fansigning is to join their Daum cafe, or follow any official venue of communication from their company. For example, SM Entertainment and YG Entertainment regularly post announcements for their artists on their artist homepages. Although stores also post fansigning information, artists usually do multiple fansignings at multiple stores during their promotion period, so it’s easiest to keep track of where and when they’ll be doing fansigns from their own websites.

There are essentially two ways to get into fansignings: by lottery or on a first-come-first-served basis.

The majority of idols use this method for fansignings. Attendees of the fansign are picked through a lottery, with each album purchase equaling one ticket into the lottery. There will be a set purchase period for CDs, and fans will have to go to a specific store and purchase a CD within that time frame to be eligible for the fansign. Winners are announced through the store’s website, usually the night before the event.

Here is an example of an announcement for an INFINITE fansigning for their “Reality” album, taken from their official Daum cafe: 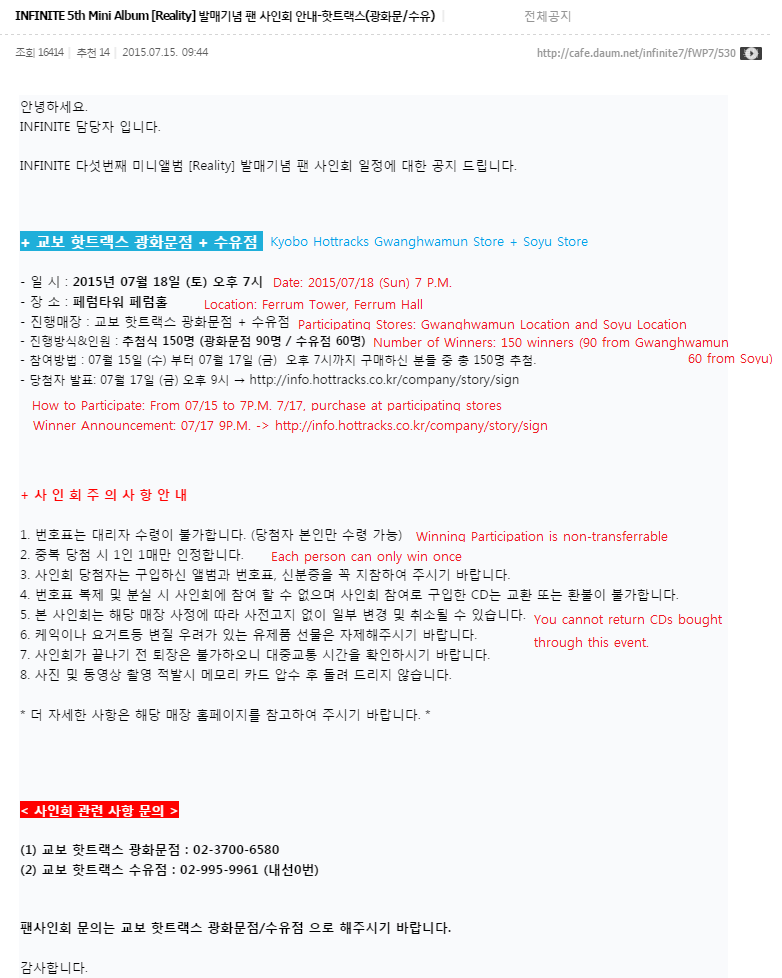 The easiest method to get into fansigns, admittance is granted to the first 100-150 fans that come and purchase a CD at a specific store after a specific time. This method is usually for recently-debuted idol groups, or for solo artists such as San E or Younha. The key word to look for in the announcement is 선착순 (seon-chak-sun), which means the fansign is first-come-first-served.

Be warned though — not a lot of artists use this method, and you might have to show up early to line up to get a spot depending on who it is.

An example of an announcement for a first-come-first-serve fansign for San E, taken from the Hottracks website: 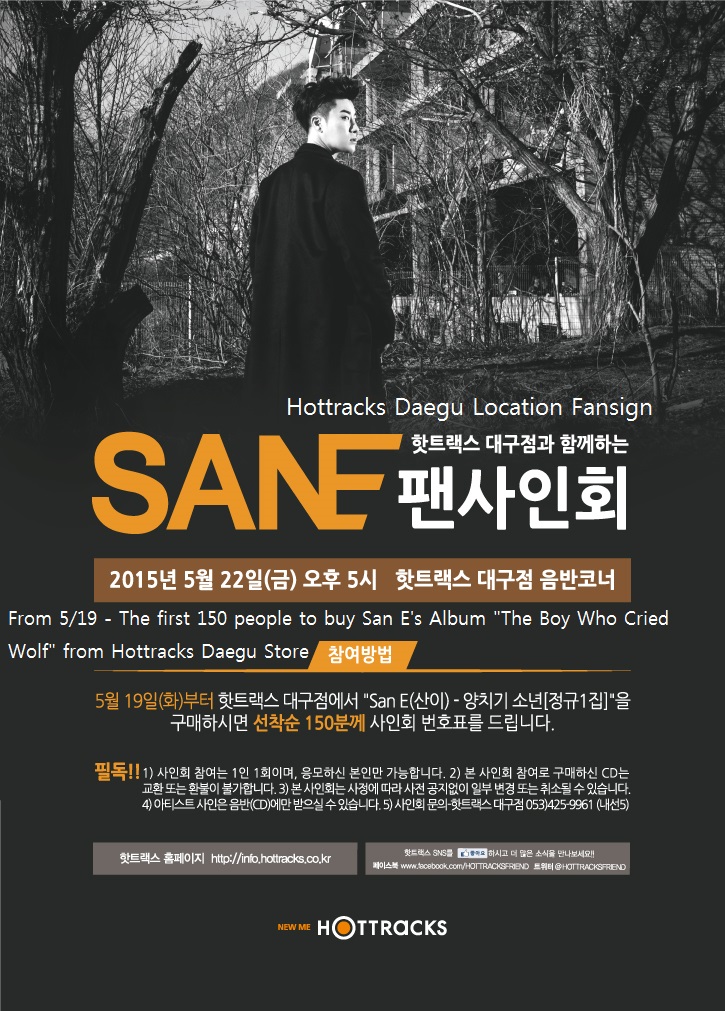 For the lottery method, you often need to purchase more than one album to have a chance to get in. Depending on the popularity of your group, fans often say there is a “minimum” to have a fighting chance, and a “guarantee” at a certain amount of albums. For INFINITE, when all seven members are participating in a fansign, the “minimum” to have even a (somewhat slim) chance is 15-20 albums. When subgroups INFINITE H and INFINITE F were doing fansigns, fans often said there was a “guarantee” to get in at 30 to 40 albums; since all members weren’t promoting, there was a better chance of getting in because not everyone applied. Of course, there are also some people who are extremely lucky and get in with one album, and some who purchase 200 and don’t even get in (I heard this for EXO). In the end it comes down to luck, though you can better your chances the more albums you buy. 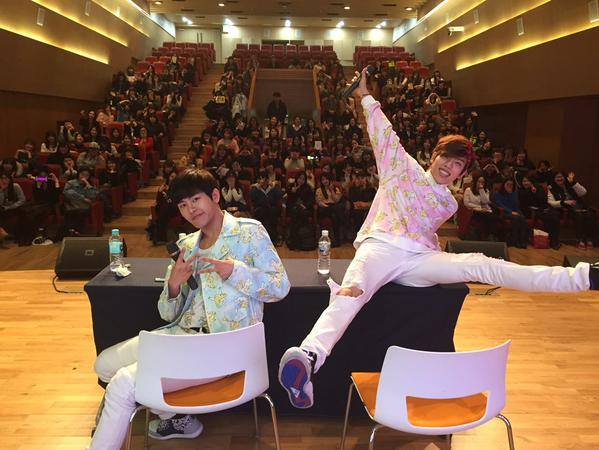 Pay attention to the stores as well. Oftentimes stores will split the number of winners across two stores. For example, in the announcement above, Hottracks split the number of winners (150) across their two stores, picking 90 from one store and 60 from another. Your chances are better if you purchase from a store that doesn’t split their winners across various locations. In addition, it’s better to purchase in bulk all at one store than split your purchases across multiple ones. Some fans also say to pay attention to the time and location, as fansigns located in inconvenient locations and at inconvenient times are usually slightly easier to strike for.

If you’re really determined, lotteries are usually easier to win in cities outside of Seoul. You can often call the stores and order over the phone during the fansign period and stores will ship the CDs to you.

On The Day Of

Awesome! Your luck has pulled through and you’re in. Artists will usually take fan letters and gifts during the event, so make sure you come prepared if there’s something you want to give them or something you’d like to put down on paper. Depending on the artist, sometimes they also let you stick post-its with questions in them and artists will answer them during the fansign (make sure it’s something quick!). If you applied and got in through the lottery process, you’ll arrive and randomly pick your seat. Seats for the first-come-first-served method are assigned based on the number you received when buying a ticket. At most you get a minute or two of face time with your idol, so think of what you want to say in advance! Photos are not allowed during the actual fansigning, though artists will usually have a few minutes of “phototime” at the end. Have fun! It’s a once in a lifetime experience~ 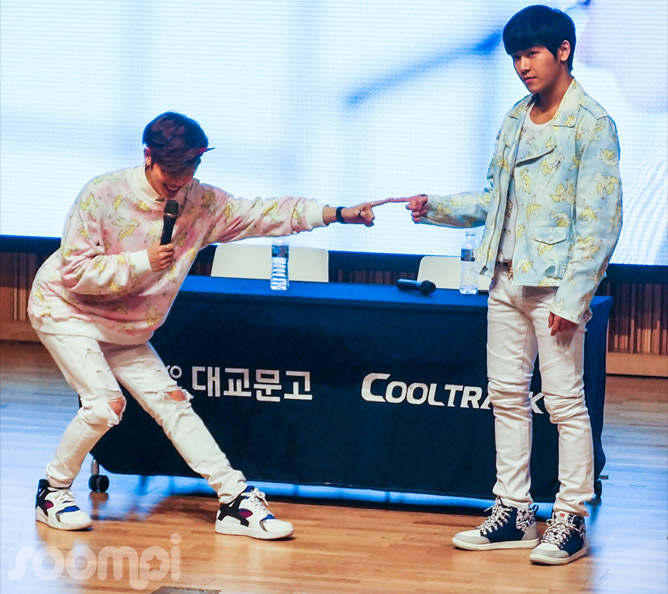 What would you like to see next on K-Pop 101? Have you ever been to a fansigning before? Share you experiences below!