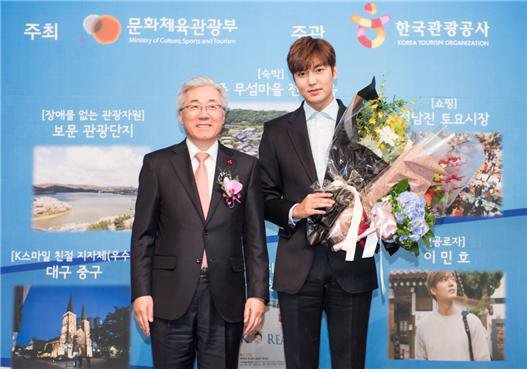 It’s no secret that actor Lee Min Ho is one of Korea’s top stars, but the Ministry of Culture, Sports, and Tourism has crowned him the “Shining Star of Tourism” of 2015!

Starting in 2010, the Ministry of Culture, Sports, and Tourism has teamed up with Korea Tourism every year to present an award to those who best promote tourism in Korea. Other recipients of the award include actors Bae Yong Joon and So Ji Sub, girl group KARA, Olympic medalist Kim Yuna and actress Jun Ji Hyun.

Lee Min Ho was recently selected to be one of the ambassadors of Korean Tourism for two years, in addition to being selected as the face of the upcoming 2018 Pyeongchang Winter Olympics. The Ministry of Culture, Sports, and Tourism stated, “We’ve selected Lee Min Ho as the sole recipient of the award due to his efforts in public relations and promotional videos. Especially in the face of MERS, Lee Min Ho’s performances and promotional videos have made a huge impact.”

Since the release of Lee Min Ho’s promotional video in July, views have sky-rocketed past 37 million views.

Meanwhile, Lee Min Ho is set to hold his solo concert in January 2016, with dates confirmed for Korea and Japan.

Korea Tourism
Ministry of Culture Sports and Tourism
Lee Min Ho
How does this article make you feel?