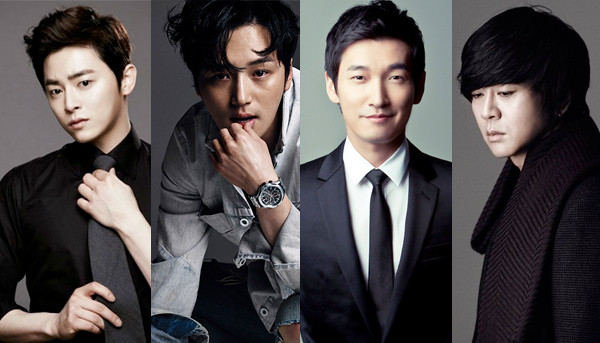 The musical “Hedwig and the Angry Inch” will be making its return to Korea next year, with some big names putting on the famous fabulous blonde wig to take the lead role.

Shownote, the producers behind this production, stated on December 24, “In 2016’s fresh return of ‘Hedwig and the Angry Inch,’ Yoon Do Hyun, Cho Seung Woo, Jo Jung Suk, Jung Moon Sung, and Byun Yo Han have been confirmed to play Hedwig.” It has been almost two years since the hit musical was last staged in Korea.

Yoon Do Hyun, Cho Seung Woo, and Jo Jung Suk have already shown audiences their own takes on the legendary cross-dressing diva Hedwig in previous productions of the show. Meanwhile, Byun Yo Han previously said on a radio show that he would like to try the role.

Joining these five stars as Hedwig’s husband and band mate Yitzhak will be rock singer Seo Moon Tak, as well as Im Jin Ah and J-Min. Members of Yoon Do Hyun’s rock band YB will also be taking the stage as members of Hedwig’s Angry Inch band.

“Hedwig and the Angry Inch” is a rock musical written by John Cameron Mitchell and Stephen Trask, which first opened in 1998 in New York City and later was made into a cult hit film. The first Korean production of the musical opened in 2005, and became a hugely popular show in Korea that has run for nine seasons in total, with over 1,650 shows staged over its history.

Byun Yo Han
Cho Seung Woo
Hedwig and the Angry Inch
Yoon Do Hyun
Jo Jung Suk
How does this article make you feel?