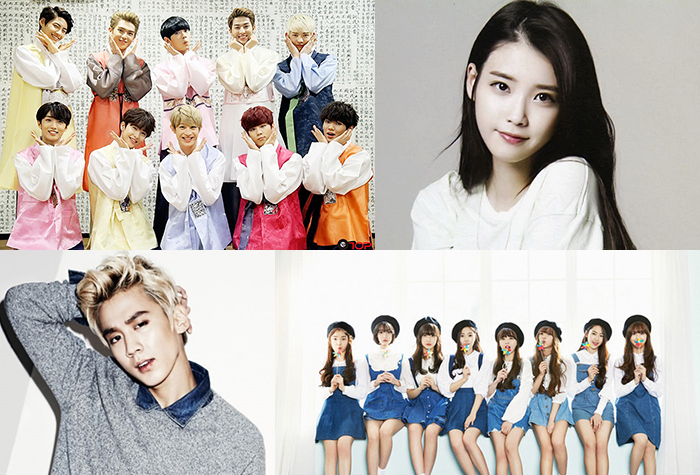 K-Pop Idols Who Will Be Training on Christmas

While there are many idols who have various schedules on Christmas Eve and Christmas Day, and others who will be taking a well-deserved break, still others will spend the holiday honing their craft through training.

For those preparing for concerts, these extra days of training are an immense help. IU recently wrapped up her domestic concert tour and will be spending Christmas preparing for her encore concerts on December 30 and 31. Hong Dae Kwang and SG Wannabe are both in preparations for concerts on December 26 and 27, and BTS will be training for their upcoming concert in Kobe, Japan.

In addition, Teen Top‘s Chunji is preparing for his reprising role in the musical “Caffeine,” which will run in Japan. Rookie groups are taking advantage of the time to practice, as well; newly-debuted Oh My Girl is preparing a new album, and new group IMPACT, which is being hailed as the “little brothers of Nine Muses,” are working hard ahead of their January debut.

Finally, many groups are getting in some last minute preparations before the end-of-the-year awards ceremonies. EXO, SHINee, Infinite, Lovelyz, UP10TION, Red Velvet, MAMAMOO, Ailee, GFRIEND, Wonder Girls, A Pink, CNBLUE, AOA, EXID, GOT7, MONSTA X, 2PM, and many more are focusing on practicing for their upcoming music festival performances.