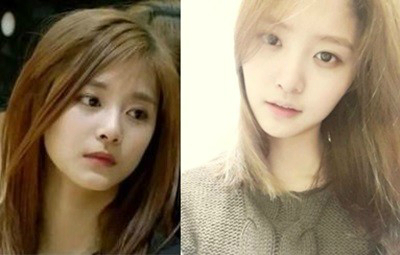 TWICE‘s Tzuyu and EXID‘s Junghwa are drawing attention for their surprisingly similar looks!

Their resemblance was brought to fans’ attention after a side-by-side comparison of their photos was recently posted on an online discussion board.

At a glance, they might resemble each other due to the flattering angles and nearly identical hairstyles, but a closer look reveals that Tzuyu and Junghwa actually have quite similar facial features. Both of them have straight eyebrows and smooth jawlines, and even their eyes and noses are pretty similar.

Many have been surprised to see how much the two idols resemble each other, wondering if this marks the discovery of another pair of idol doppelgangers.

Do you think they look alike?

TWICE
EXID
Tzuyu
Jeonghwa
How does this article make you feel?