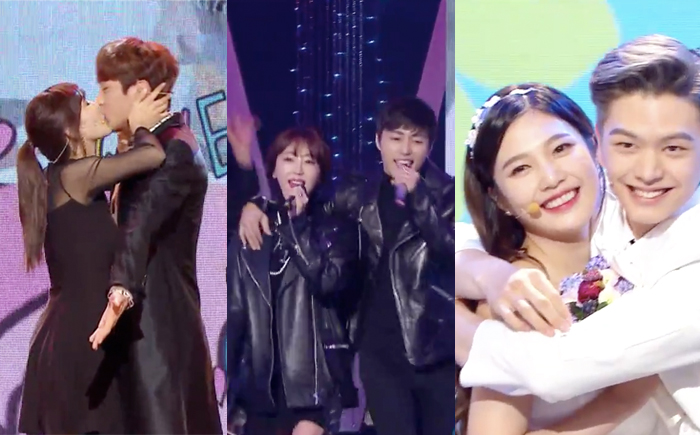 All three current virtual couples from “We Got Married” show off their talents and romantic sides at the “2015 MBC Entertainment Awards” as they collaborate for a medley of special performances!

Kwak Si Yang and Kim So Yeon take to the stage first and perform the song “Nice to Meet You” by G.NA featuring Wheesung. As the song is ending, Kwak Si Yang puts his arms out for a hug, but Kim So Yeon grabs him and steals a kiss on the lips instead.

Next up, Oh Min Suk and Kang Ye Won perform their song “Oh Yeah,” which gives both of them the chance to show off their rapping skills live.

BTOB‘s Yook Sungjae and Red Velvet‘s Joy then share their cover of Bruno Mars‘s “Marry You,” complete with a really impressive costume change on stage!

Check out their performances below – and don’t miss EXO‘s hilarious reaction to Kim So Yeon and Kwak Si Yang’s kiss!