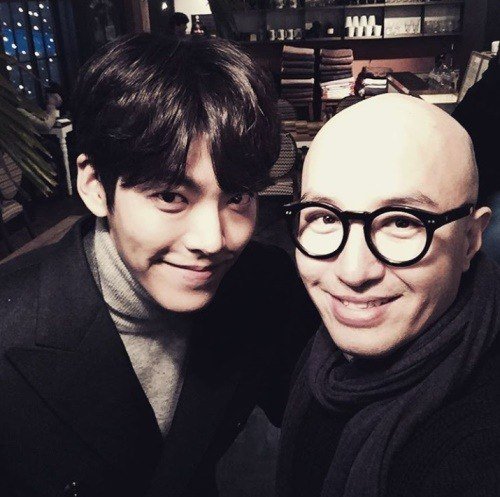 “Kim Woo Bin has been my friend since his debut,” says Hong Suk Chun. “His real name is Kim Hyun Joong. Because there was already the singer Kim Hyun Joong, he’s been working under another name.”

“Kim Woo Bin is really the best,” he goes on to say. “He hasn’t changed at all since his debut.” Host Kim Tae Kyun comments, “Kim Woo Bin always sends long replies when he’s texting.”

“I thought he was just like that to me,” jokes Hong Suk Chun. “Every holiday, Kim Woo Bin sends me a message wishing me a happy holiday. And he adds two hearts.”

Hong Suk Chun also mentions that he recently met Ryu Jun Yeol and Ahn Jae Hong at a party following a VIP screening of the film “The Himalayas.”

“Ryu Jun Yeol and Ahn Jae Hong came to the party because they are the ‘sons’ of Ra Mi Ran, who appears in the film,” he explains, referring to their roles in the drama “Reply 1988.” He adds, “We met there and talked while we had some beer together.”

Hong Suk Chun recently also shared a shot to Instagram of himself with Kim Woo Bin while they were having dinner together at Hong Suk Chun’s restaurant in Itaewon.