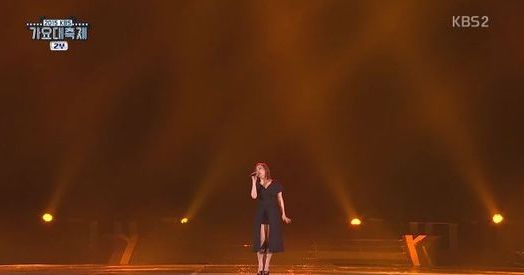 At the 2015 KBS Song Festival broadcast on December 30, one of Son Seung Yeon’s backup singers fell from the stage during her performance. As part of the “Immortal Songs” team, Son Seung Yeon was performing “A Student Boarder” (originally by Choi Hee Joon).

A choir was supposed to walk on in the middle of her performance, but one of the members did not take into account the shape of the stage and ended up falling off. The incident was captured on live broadcast.

In order to reassure her fans, Son Seung Yeon quickly took to Twitter, writing, “During my performance, one of the choir members fell. Thankfully, they are okay, in case you were worried while watching the broadcast.”

A KBS representative said, “As the choir member walked onto the stage, he did not see the empty space and fell. Thankfully it was not too high and he was not badly hurt. After the accident he got up and finished the performance.”

You can watch the incident starting around 2:05 below:

2015 KBS Song Festival
Son Seung Yeon
How does this article make you feel?