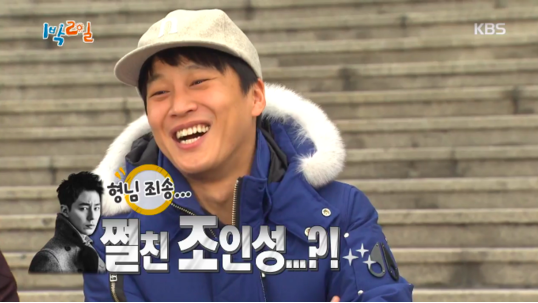 On the December 3 episode of KBS 2TV’s “2 Days & 1 Night,” the members head off to Hongcheon in Gangwon Province. As soon as the cameras start rolling, Cha Tae Hyun asks the staff, “Is everyone saying they won’t do our program? Be honest.” Yoo Ho Jin PD is flustered by the question and answers, “It’s taking a long time because we’re thinking it over carefully.”

Long-time member Kim Joo Hyuk left the show near the end of 2015, bringing the member count to five. The show will be looking to replace him after featuring major league baseball player Choo Shin Soo as a guest last episode.

Defconn and Kim Jong Min ask Cha Tae Hyun to give a casting call to his close friend Jo In Sung, but Cha Tae Hyun replies, “He says he won’t do it.” Jo In Sung appeared as a guest on the show in 2014.

Not giving up, the members ask for Song Joong Ki and Park Bo Gum. While Cha Tae Hyun says that Song Joong Ki won’t do it either, he says about Park Bo Gum, “I think he’s out of our reach now.”