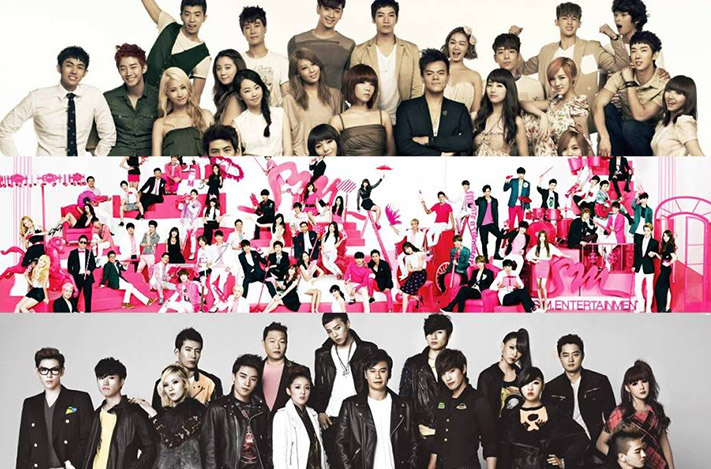 What Are Your Favorite Groups Doing in 2016?

Korean news outlet XsportNews recently reported the 2016 plans for ten different entertainment companies. These plans include a slew of rookie debuts from agencies big and small, solo debuts from seasoned veterans, and a number of comeback and solo activities across the board.

Big Hit Entertainment will not be debuting a new group in 2016; instead, they will be focusing on their sole active group BTS. Group activities and concert preparations are underway, and the company is currently considering solo and unit activities, as well as different variety and theatre opportunities.

Starship Entertainment has its newest girl group, Cosmic Girls, set to debut in the beginning of March, while the ladies of SISTAR will be focusing on their individual activities, including another collaboration between Hyorin and Soyu. MONSTA X has plans for Korean and Chinese promotions, and Boyfriend also has domestic and international plans in the works. Additionally, the solo artists like Junggigo and Yoo Seung Woo will consistently be putting out music as the year goes on.

Star Empire also has a new group set to debut. IMFACT will debut at the end of January, and are garnering interest for the fact that though they are rookies, they participate in the composing and writing of their music. Star Empire plans to devote most of its resources into IMFACT so that they can have multiple comebacks throughout the year.

SM Entertainment has their hands full with its first boy group since EXO, as the boys of SM Rookies are set to debut this year, as well. In addition, Super Junior will be commencing all activities under their dedicated label that was established on their 10th anniversary, including Ryeowook’s upcoming solo debut. SHINee, Girls’ Generation, f(x), and EXO will all be working on group and solo activities, as well, which includes another solo album from Amber. Red Velvet will also continue their seemingly unending stream of activities.

FNC Entertainment will be launching their first ever dance group with Neo School, which has nine members. FT Island, CNBLUE, AOA, N.Flying, and Juniel will all have at least one comeback in 2016. CNBLUE especially will be focusing on music and variety activities, and AOA will challenge group, unit, and solo activities.

For YG Entertainment, young group WINNER will be making their first comeback in over a year, while BIGBANG and iKON are either currently touring or will be touring Japan. Akdong Musician is currently in talks for a comeback, and Lee Hi is preparing for a new album with Tablo‘s supervision under HIGHGRND. BIGBANG’s T.O.P is set to enter the army in 2016, and all members of 2NE1 except for CL have yet to resign their contracts with YG. In addition, the girl group hailed as the “little sisters of 2NE1,” which has been under consideration since 2012, is still unconfirmed.

Woolim Entertainment‘s plans for INFINITE are to continue with the world tour concert plans, as well as music and variety activities as they did in 2015. They’re also considering returning to solo and unit activities. Lovelyz will continue to focus on domestic activities, and are planning to start attempting variety and acting activities, as well. Nell is currently preparing their next full studio album, and there is still the possibility of a new group from Woolim in 2016.

JYP Entertainment also has a packed year ahead of them. Rookie groups Day6 and TWICE will focus on domestic activities. Wonder Girls, GOT7, and 2PM will all have at least one comeback this year, and the boy groups will have domestic and international activities. Suzy will be focusing on her solo activities, and G.Soul, 15&, Baek Ah Yeon, and Bernard Park will all release albums this year.

Cube Entertainment will join the ranks of the rookie debuts with their five-member boy group Pentagon set to debut in 2016, which is their first since BTOB debuted in 2012. 4Minute will be making their comeback in January, followed by comebacks by CLC, BEAST, and BTOB. In addition, solo and unit activities from these groups are a strong possibility, especially by those who are already established actors, such as Yook Sungjae and Yoon Doojoon.

Finally, Pledis Entertainment will be bringing NU’EST back for Korean promotions for the first time in quite a while, and rookie group SEVENTEEN will have at least two comebacks this year. Orange Caramel will be making their return with a new concept, and After School solo activities are underway, though a group comeback has still not been confirmed.

Whose comeback are you most looking forward to?