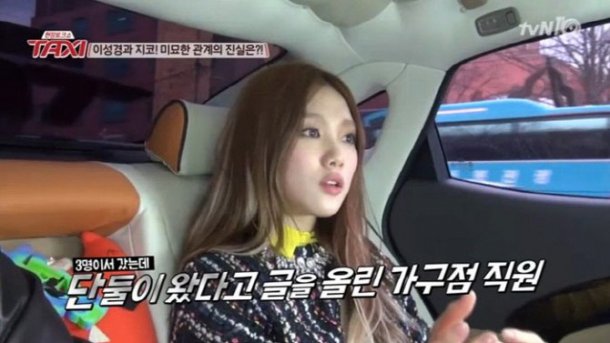 Actress Lee Sung Kyung has spoken up about dating rumors with Block B’s Zico on the January 5 episode of tvN’s “Taxi,” where she appeared with actor Seo Kang Joon.

On the show, she explains how the rumors started, saying, “Recently I moved into my own place, and went to Nonhyun-dong to look at furniture. I saw Zico and a friend at a restaurant, so I stopped by to say hi, and they said they would come along. The three of us went to look at furniture, and the employee at the store posted [that we had come to the store] online.”

When asked if it’s possible that she and Zico could date, Lee Sung Kyung says, “It’s not. We don’t see each other that way.”

Block B
Lee Sung Kyung
Taxi
Zico
How does this article make you feel?