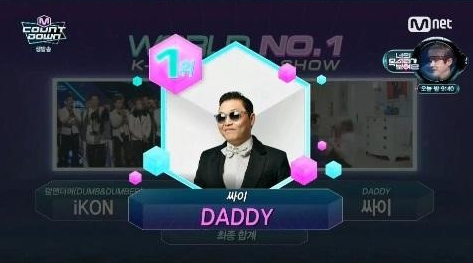 On the January 7 broadcast of Mnet’s “M!Countdown,” PSY grabbed the first trophy of 2016 with his latest hit “Daddy.” The other nominee for No.1 was boy group iKON with their debut album title track “Dumb & Dumber.”

Despite winning, PSY did not appear or perform on this week’s show.

The solo star has been enjoying massive commercial success with his latest album, and “Daddy” continues to rank in the Top 10 on most major charts. Last month, he won on SBS’ “Inkigayo” for three weeks straight.

PSY
M!Countdown
How does this article make you feel?