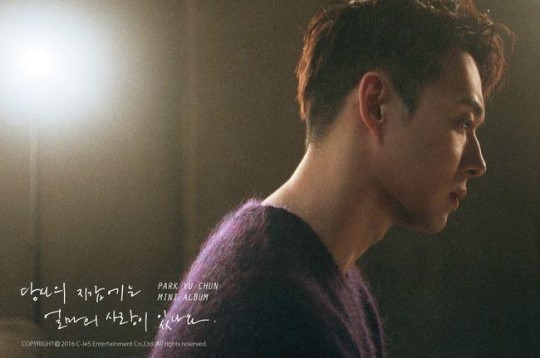 JYJ‘s Park Yoochun will be releasing his first solo album, recorded before enlisting in the military.

On January 8, C-Jes Entertainment stated, “Park Yoochun will be releasing his first solo album ‘How Much Love Do You Have In Your Wallet (tentative title)’ on January 18. We will start pre-orders this afternoon.”

Park Yoochun’s single album contains everyday stories that people experience and sincere messages to his fans that he couldn’t say until now.

The album also has the song “Walking With Her in Spring (tentative title),” which he sang in 2013 at a Tokyo Dome concert, and other meaningful songs written for his loving fans.

An affiliate stated, “Park Yoochun was debating what kind of gift he should give his fans before enlisting, so he decided to produce his first solo album despite being busy filming dramas and movies. He usually likes listening to indie bands and acoustic songs, which is all expressed in his solo album.”

Park Yoochun’s solo album will be released on January 18 at 12:00 a.m. together with the release of the title song’s music video.