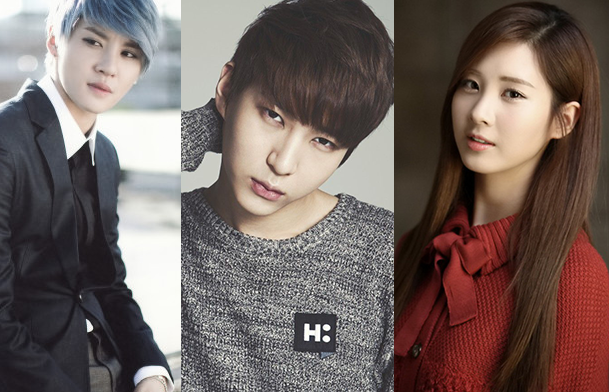 Idol Musical Actors to Look Forward to in 2016

Many K-pop idols aspire to shed the stereotypes associated with their celebrity status, and do so in different ways. Some take on variety shows, others try drama and film acting, and still others take to the theatre stage to showcase their talents. In 2016, many idols will be participating in musicals of all genres.

JYJ‘s Junsu will be starring for the second time in the musical “Dracula,” which runs from January 23 to February 9. Already a seasoned musical actor, Junsu was among the first idol stars to foray to the musical stage. He’s previously starred in works such as “Elisabeth” (which Se7en made his musical debut with in 2015) and more recently, “Death Note.”

2AM‘s Changmin is also a veteran when it comes to musical acting, and he will be starring in the opera “Turandot” from February 17 to March 13. Changmin made his musical debut in 2012 with “Carpe Diem” and has participated in a number of musicals big and small.

Seohyun of Girls’ Generation will also be making her return to the stage with a role in “Mamma Mia!” She previously participated in “Gone With the Wind” and “The Moon Embracing the Sun.” She’s not the only member to have tried her hand in musicals, either; Sunny has participated in “Catch Me if You Can” and “Singin’ in the Rain,” and former member Jessica Jung starred in “Legally Blonde.”

Jung Taek Woon (better known by his idol stage name, Leo of VIXX) will be taking on his second-ever musical role in “Mata Hari,” having previously expressed his desire to shed his idol image when on the theatre stage. He made his musical debut in the 2014 production of “Full House.”

Lastly, 5URPRISE member Yoo Il will be tackling the musical adaptation of the film “Secretly, Greatly,” which was made popular by actor Kim Soo Hyun. Other musicals that have previously starred idol actors will also be returning in 2016, including “The Three Musketeers,” “Jack the Ripper,” “Mozart!”, and “Gorae Gorae.”

Which idol actor are you most looking forward to in 2016?