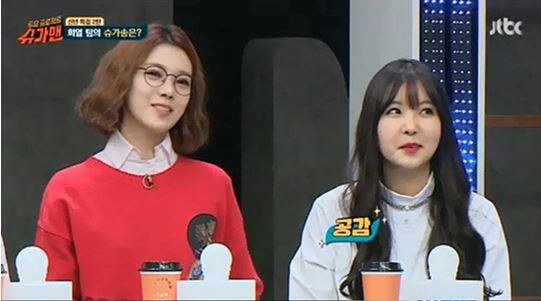 On the recent broadcast of “Sugar Man” on January 12, After School‘s (Orange Caramel) Raina and Lizzy appeared as guests and talked about their experiences of going solo.

During the show, MC Yoo Jae Suk asks Orange Caramel what the difference is between promoting as a group and promoting alone. Raina answers, “You make more profit (promoting alone).” However, Lizzy chimes in and says, “I recently checked my account and I found out that promoting alone made me have debt. I should just promote as a group from now on,” and laughs.

Meanwhile, Orange Caramel performed the song “You in My Imagination” during the show and was chosen from the panel of judges. Lizzy teared up saying, “I never won first place since my debut. I’m so touched.”