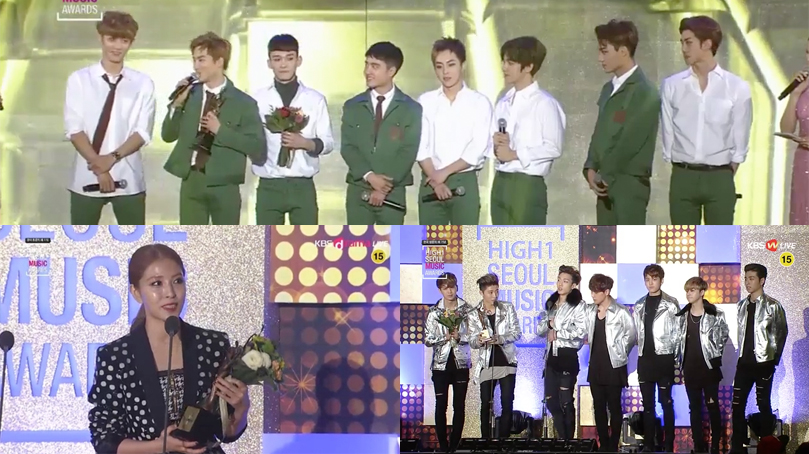 The “25th Seoul Music Awards” on January 14 was an exciting night that celebrated some of the best that K-Pop has to offer!

The awards show was hosted by Jun Hyun Moo, Honey Lee, and EXID’s Hani, and was held at the Olympics Gymnastics Arena at Olympic Park in Seoul.

EXO grabbed the Daesang (Grand Prize) award once again this year, meaning they have now received the award a record-breaking three years in a row! The group also won a Bonsang (Main Prize) award and the Korean Wave Special Award.

During their acceptance of the Daesang, member Kai showed off his dancing skills at the encouragement of his fellow members and the many fans in the audience, in celebration of his birthday.

BoA took home the Best Album award for “Kiss My Lips,” which is the top star’s eighth full-length album and features songs that were all written, composed, and produced by BoA herself. As she accepted her award, BoA said, “It was very difficult to produce the entire album, but I learned a lot and I was very happy. Thank you for such a meaningful award.”

BIGBANG won both the Best Digital Song award for “Bang Bang Bang,” as well as a Bonsang at the ceremony. They weren’t able to attend the show, and so their label mates iKON stepped in to accept their awards for them.

iKON also received their own award that night as they were the recipients of the Newcomers Award, along with SEVENTEEN and GFRIEND.