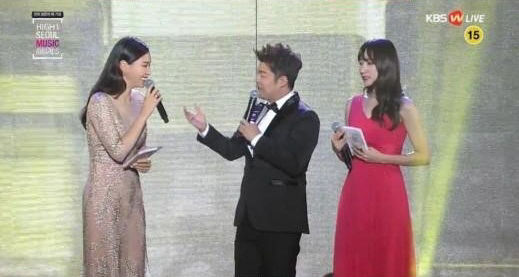 Hani and Jun Hyun Moo were joined by actress Honey Lee to host the show, and Jun Hyun Moo joked at the beginning, “There’s a Honey on one side of me and a Hani on the other! I’m not sure what I should do!”

“You should just enjoy it,” jokes Honey Lee, and the two female stars laugh and play around by putting their elbows on his shoulders.

Jun Hyun Moo then asks them what he should call them to make it easier. Hani replies, “Call me ‘Easy-going Hani’!”

Honey Lee comments on how pretty Hani is, and then Jun Hyun Moo turns to Hani and says, “You’re very good-looking today!” The word he uses for “good-looking” is a homonym of Junsu’s name, and the crowd erupts in screams at his pun.

Hani does not reply, and looks stunned and upset as Honey Lee says to Jun Hyun Moo with a laugh, “Don’t say things like that!” Jun Hyun Moo then makes a similar joke to Honey Lee. “Since you’re doing so well in work and love, how about ‘Got Honey’?” he asks her, and then spells out “g.o.d” with a laugh to clarify his pun about Honey Lee’s long-term boyfriend Yoon Kye Sang of g.o.d.

As the two are laughing, Hani turns away from the camera briefly to wipe her eyes and collect herself.

Junsu won the Popularity Award, which was voted on by fans online, at the Seoul Music Awards, but many fans are outraged that he was not invited to the show. It has been reported that producers have claimed that they decided not to present the award during the live ceremony in order to focus on “major award categories.”

Hani and Junsu have recently both been under the spotlight after officially confirming that they are dating on January 1.