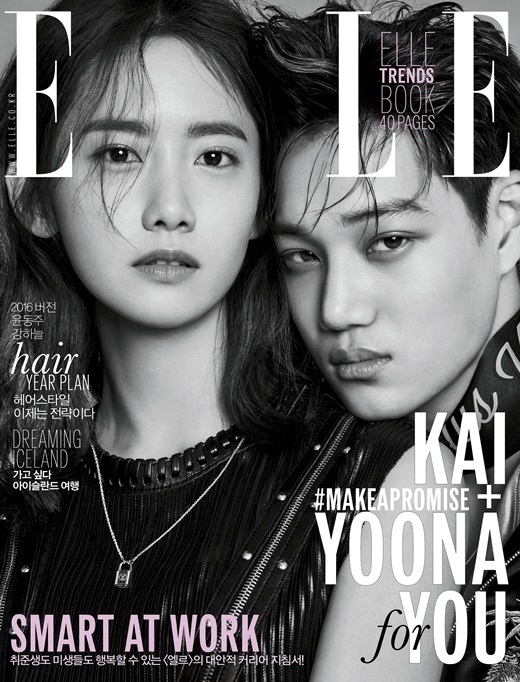 As the representative visuals in their respective groups, the two of them make a handsome pair as they flaunt their chemistry. The black-and-white cover features YoonA’s deep and soft eyes as well as Kai’s strong charisma.

Just like the couple pictorial for EXO’s Sehun and Red Velvet’s Irene with CeCi magazine, YoonA and Kai are also participating in UNICEF and Louis Vuitton’s “Make a Promise” campaign. SM Entertainment and J Contentree magazines are collaborating in this effort as well. 40 percent of the proceeds from the sales of the necklace and bracelet worn by the stars will go toward helping children in need.

YoonA has previously been a UNICEF ambassador and participated in numerous charity projects. Likewise, Kai has been involved in volunteer work such as providing coal briquettes for the less fortunate alongside his fellow EXO members.

More of their couple photo shoot and interview can be seen when the issue is released on January 20.

EXO
Girls' Generation
Elle
Kai
YoonA
How does this article make you feel?