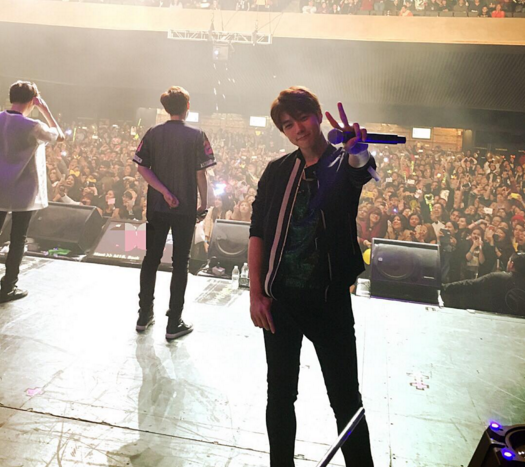 Watch: INFINITE’s L Reacts to Getting Underwear Thrown at His Face

INFINITE’s L had an adorable reaction after unknowingly catching a pair of underwear at the group’s Mexico concert.

In the video, L is seen reflexively catching an object thrown from the audience. After catching it, it unfold in his hands before he realizes it’s a pair of panties! He immediately drops the object and starts laughing, looking over at Hoya who witnessed the whole event. The two pause for a moment before continuing the choreography for the performance. The video also provides a shot of Hoya laughing throughout the event, and patting L on the back afterwards.

INFINITE kicked off their world tour “INFINITE EFFECT” last August in Seoul. They have visited a total of eleven countries, and performed a total of 15 shows in 12 different cities. Most recently they held concerts in Canada, Los Angeles, Mexico, New York, and Hong Kong during the second round of their tour.

The group is planning to hold an encore concert in Seoul “INFINITE EFFECT Advance” on February 20-21 to wrap up their tour.

Watch the cute video down below, and let us know what your reaction was in the comments!

UPDATE: Fans are pointing out to us that the object thrown wasn’t a pair of underwear, but a Mexican wrestling mask! It looks like the idol was confused which spurred the reaction above.

Hoya
INFINITE
Kim Myung Soo
How does this article make you feel?