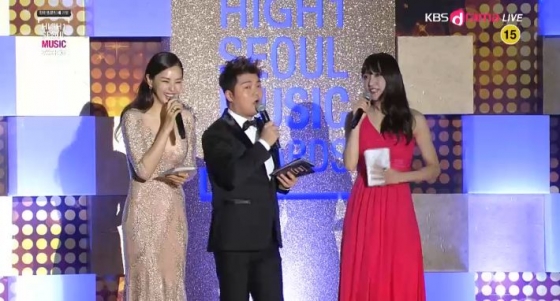 EXID‘s agency Yedang Entertainment finally responded to pictures of Hani with teary eyes during the Seoul Music Awards, and confirmed that she was crying.

They said on January 15, “We agree that Hani’s actions were not professional. It is crucial to act professionally while on air.”

“However, we couldn’t actually ask Hani about how she felt during that time. It is her own personal life, and it isn’t right to ask the reasons behind her tears,” they added. “We’ve been told that Jeon Hyun Moo is now subject to a lot of negative commentary. Our agency is trying to gradually end everything in good terms.”

After EXID received an award, Jeon Hyun Moo, one of the hosts for the show, said, “ Who are you thinking of the most right now?”

“I’m thinking of my fans and my parents the most,” she responded. “[Kim Junsu] received the Popularity Award today. Though he could not be here today, I am proud of him.”

When her boyfriend Kim Junsu was unable to even attend the awards, let alone receive his award in person, Hani could be seen upset at the situation. When Jeon Hyun Moo joked, “You look very junsu (handsome; a Korean play on words because junsu means handsome in Korean),” fans captured shots of Hani turning around with watery eyes.

Fans speculated Hani, who is currently under attack after her relationship with Junsu went public, was crying.