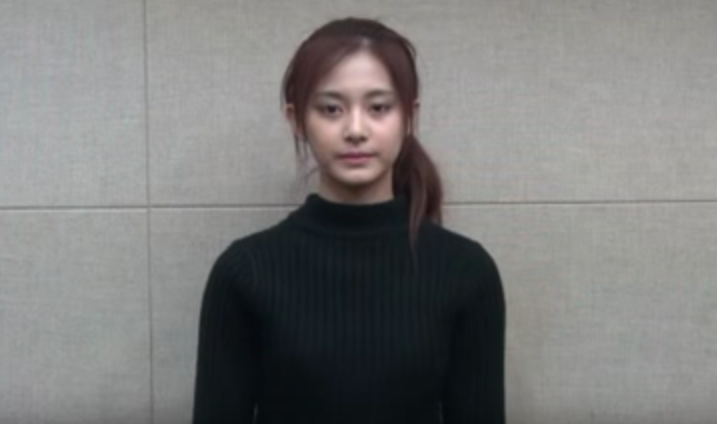 Tzuyu of JYP Entertainment‘s girl group TWICE has made a video to apologize for the ongoing controversy surrounding her nationality.

The video of her official apology was shared by JYP Entertainment on January 15. This comes just hours after it was revealed that 2PM member Nichkhun’s appearance at a Chinese event had been canceled, along with other scheduled Chinese activities of 2PM. The stocks of JYP Entertainment have also experienced a sharp decline ever since the nationality issue started to escalate earlier this week.

In the video, Tzuyu is seen standing in front of a gray wall, facing the camera in a casual attire. In Chinese, she begins with a short self introduction and a deep bow, followed by “I’m sorry.”

She goes on to say how there is only one China and how she feels proud about being Chinese, as well as apologizes for hurting the feelings of netizens in both countries and members of JYP Entertainment with her actions. To further apologize to everyone, she will be “halting Chinese activities” and “reflecting on her mistakes.”

Park Jin Young has also issued an official apology on the matter through JYP Entertainment’s website, claiming responsibility for the controversy and apologizing to Chinese fans.