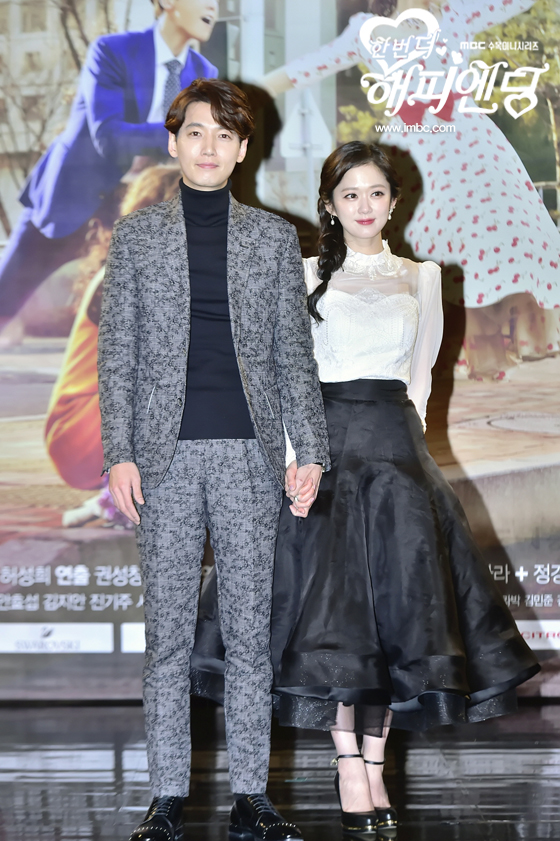 On January 18, the main cast consisting of Jung Kyung Ho, Jang Nara, Kwon Yool, Yoo In Na, Yoo Da In, and Seo In Young met with the press ahead of the drama premiere scheduled for this week.

When asked to share his thoughts on acting alongside Jang Nara, Jung Kyung Ho revealed his excitement, “I’ve followed Jang Nara since high school. I had been looking forward to acting with her some day, and I feel honored to meet her.”

Regarding their chemistry so far, he commented, “The shoots have been fun. For the teaser, we had to shoot a scene of us falling to the ground together. The producers had were quite worried at first, but fortunately [shooting the scene] turned out to be not that difficult.”

“I’m honored to spend my January together with such good senior actors. I think we’re off to a good start. I hope that 2016 will turn out to be a year filled with happiness thanks to you.”

Meanwhile, “One More Happy Ending” will premiere on January 20 at 10 p.m. KST.

Check out the first preview below!

Jang Nara
One More Happy Ending
Jung Kyung Ho
How does this article make you feel?