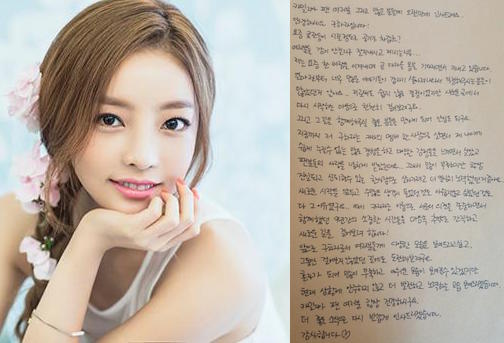 Goo Hara has posted a letter that she wrote to her fans after the recent news that KARA has disbanded and Goo Hara has been signed to the agency Keyeast Entertainment.

The letter that Goo Hara shared to Twitter on January 18 reads as follows.

“To all the Kamilia fans and to a lot of people, it’s been a long time since I’ve greeted you. Hello, it’s me, Goo Hara!

It’s been really cold lately, hasn’t it? I wonder if you’re all doing well and haven’t caught a cold. Lately I’ve been dealing with the cold winds and waiting for spring, which will come soon.

I know that there are a lot of people who are worried because of all the news that’s been coming out recently. It was a decision that was hard for me too, but I’ve decided to make a new start at a new place. I feel relieved because I’ve met great people who will be going on this journey with me.

Up until now, I’ve been living as a member of KARA, experiencing a lot of things that are rare for someone my age, feeling a lot of different emotions, and being loved so much by fans. So even though I’m lacking, I’ve been working even harder to be someone that can be trusted. That’s also why, ahead of my new start, I’ve been thinking a lot and don’t want to have regrets.

I’ll keep in my heart the precious nine years we spent together as KARA as we respected each others’ opinions, and now I will walk on a new road. I want to show you new sides of me in the future as Goo Hara. And I want to take on the challenge of walking on roads I haven’t been on before.

It’s possible that I could seem very lacking now that I’m on my own, but I’m not going to settle for my current self, and I’ll show you how I will improve and try hard.

Kamilia fans, please stay healthy. I’ll talk to you in the future with better news.

It was previously reported that under Keyeast, Goo Hara plans to pursue acting in Korea while promoting as a singer in Japan.