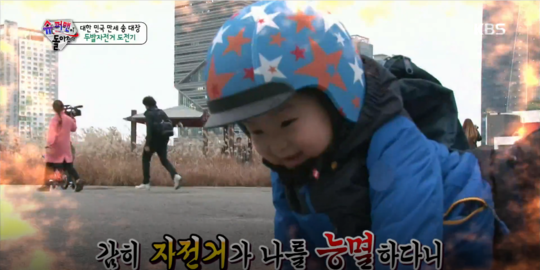 It’s Minguk Versus His Bike on “The Return of Superman”

On the January 17 broadcast of KBS 2TV’s “The Return of Superman,” the Song triplets challenged themselves to riding bicycles for the first time.

In September of 2014, the triplets had learned to ride tricycles, albeit with a lot of difficulty. Now, Daehan, Minguk, and Manse are ready to throw out their baby wheels and try out their new bikes.

Daehan seemed to show the most effort among his brothers as he attempted his first bike ride while biting down hard on his lip. Minguk expressed serious disappointment and betrayal as he said, “The bike is not willing to go forward. Listen to Minguk! The bike is making me fall down!” Adding to this adorable chaos, Manse quickly lost interest and abandoned his bike in order to play with the park’s exercising equipment instead.

Fortunately, a couple of older neighborhood friends came to the park to help the triplets learn how to ride their bikes. Manse said to one older friend, “Since we are too little, we have to get on the bike this way. It makes me want to fart.” Minguk continued to complain about his bike’s rebellious ways as he said, “The bike keeps disrupting everything,” causing the older friends to laugh.

Make sure to check out “The Return of Superman,” which airs every Sunday at 4:50 p.m. You can watch the latest episode below.