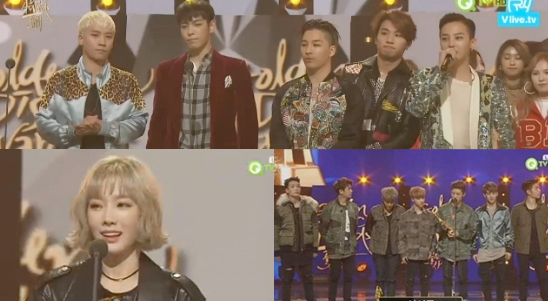 Winners of the 30th Golden Disc Awards, Day One

The 30th Golden Disc Awards, which is the biggest and most extravagant Korean music awards ceremony of the year, began with its first night on January 20!

The two-day ceremony is being held at Kyung Hee University in Seoul, and is celebrating the show’s thirty-year history. The first night of the Golden Disc Awards focuses on digital single awards, while album awards will be handed out on January 21.

The big winners of the night were BIGBANG, who took home three awards, including the Daesang, a Bonsang, and the iQiyi Best Male Artist Award.

While accepting their Daesang, member T.O.P said, “These are the first awards we’ve been given in the new year, and we’ve received three of them. I heard that we got 25 awards last year for ‘MADE.’ It’s a bit burdensome sometimes, and it makes me think about a lot of things. Instead of just becoming singers that look impressive on the outside, as we get older, we’ll work hard to become people who are impressive and beautiful on the inside too. And thank you to our fans who always support us.”

Girls’ Generation’s Taeyeon also grabbed three awards at the ceremony, as she received a Bonsang both for her group activities and her solo work, as well as the iQiyi Best Female Artist Award. Although most of the members were not able to attend, Taeyeon joined host Seohyun to accept the group’s awards on behalf of all their members.

While accepting their Bonsang, Seohyun said, “Over all these years, there’s never been even a second where we weren’t grateful to our fans. Thank you for never changing and always loving Girls’ Generation. And thank you to all our members for being with us and holding our hands every moment for the past nine years. I love you!”

Taeyeon adds, “I think our members are supporting us right now, and I want to share this award that we received together with all of them.”

Hit newcomer groups iKON and GFRIEND both took home the Rookie of the Year Award, while MONSTA X received the Next Generation Award, which is given to artists that seem the most likely to be successful in the future throughout Asia.