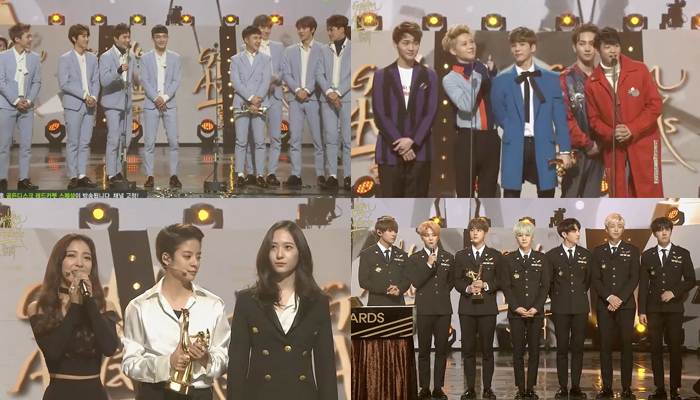 It was another huge night for the K-Pop industry and fans alike on January 21 at day two of the 30th Golden Disc Awards!

The first night of the 30th Golden Disc Awards on January 20 focused on digital single awards. Album awards were given out on the second night of the ceremony on January 21, which was hosted by Super Junior’s Leeteuk, Jun Hyun Moo, and f(x)’s Krystal.

It was yet another big year for hit boy group EXO! They received the Daesang for the third year in a row, like their SM Entertainment label mates Super Junior and Girls’ Generation did before. Kim Gun Mo, Jo Sung Mo, and SG Wannabe are the only other artists to have received three Daesangs from the Golden Disc Awards.

Suho promised everyone that EXO will be putting out a new album this year, and so Jun Hyun Moo asked him when we can expect it. “Somewhere between January and December!” joked Suho.

SHINee was also a big winner on day two of the awards, receiving a Bonsang and the Popularity Award, as well as a Bonsang for member Jonghyun’s solo work.

During their thank you speech after winning their Bonsang, Minho said, “We’re here because of our SHINee World fans. We hope you’ll stay with us until the end. Thank you!”

A Pink and VIXX:

The Best Vocal Group Award went to BTOB, while the Best Vocal Solo Artist Award was handed out to CNBLUE’s Jung Yong Hwa.

The JTBC2 Rookie of the Year Award was given to hot new groups SEVENTEEN and TWICE.

Check out the full list of awards below and let us know what you think of the night’s winners!