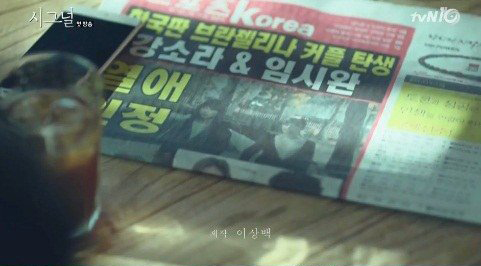 In the first episode of tvN’s new Friday-Saturday drama “Signal,” the story of a kidnapping incident leading to the case’s statute of limitations is portrayed.

Officer Park Hae Young (Lee Je Hoon) is talking to a reporter and brings up a dating scandal between actors Kang Sora and Im Siwan. The two actors starred in the popular drama “Incomplete Life” (also known as “Misaeng”) and their supposed dating story made the front page news on the entertainment newspaper sitting on the table in front of Park Hae Young. It turns out Park Hae Young is giving a tip to a reporter and is hoping to get paid in return.