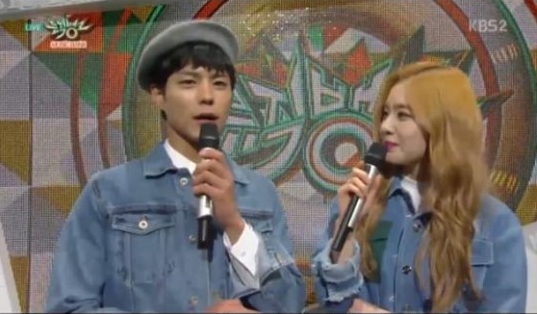 “Music Bank” hosts Park Bo Gum and Red Velvet‘s Irene have kicked off the new year by making a promise to the weekly music show’s viewers!

On the January 22 broadcast of “Music Bank,” Park Bo Gum suggested that they do something fun if the show’s viewership ratings reach high digits. This is commonly practiced by actors before the premiere of a movie or a drama to promote their project.

Upon hearing the idea, Irene said, “Should we do a free hug event if ratings surpass 10 percent?” to which Park Bo Gum cutely responded, “I like free hugs, but I don’t want to see other men hugging you.”

He then asked Irene, “What do you think of holding a fan sign event?”

“I like that idea,” Irene enthusiastically agreed on meeting their fans if the ratings for “Music Bank” reach 10 percent.

While many are showing interest in the weekly music show thanks to the charming MC duo, the show continues to lag behind in ratings, attracting only 2 to 3 percent of the potential viewership each week.